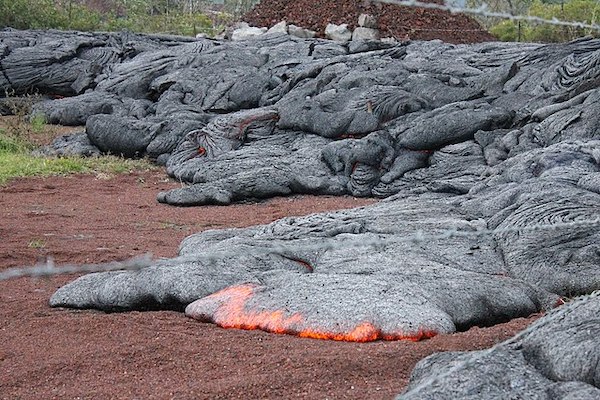 Although the Kilauea volcano is close by, it hadn’t caused trouble for the residents for a long time - because the lava flow was always going the other way, towards the ocean. All of this changed in 2014, when lava escaping from a vent in the Pu’u O’o cinder cone came gushing out in a new direction - headed straight towards Pahoa.

Just imagine yourself being one of the residents! How would you feel knowing that there’s a lava flow making its way towards your house? Although the lava was flowing quite slow, giving you plenty of time to pack up and leave. Would you still feel terrified of losing your home and livelihood? The worst thing, is that there is nothing you can do to stop it. However, one man tried, by building a berm around his house so that the flow might be diverted. Others prepared to cool it with a garden hose. But everyone knew that none of that was going to help in the face of this powerful force of nature.

Daily, the flow crept closer and closer, threatening to cover the town and pass over a main highway. The local stores sold out their merchandise and shut down in anticipation of being buried in magma. President Obama declared the area a national disaster, and state officials along with the National Guard made plans for evacuations. There was even an alternate road built to help people get out of town fast.

And so... the town awaited its doom.

Want to check out some volcanoes & lava?

Take a look at our Big Island Tours!