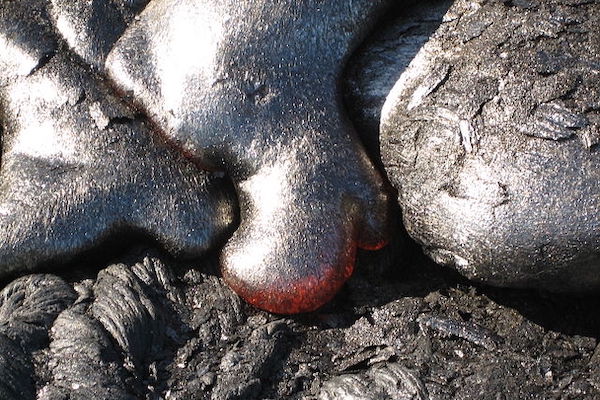 Do you believe in the superstition that Pele is behind all lava destruction in Puna? Can Pele possibly be real? Or do you think these are just naturally occurring events? This is the question that has puzzled many people in both the past and present, with many Hawaiians still believing in Pele. I wanted to tell you a few stories about Pele and let you decide for yourself.

The first story is set in 1824. After Christian missionaries began arriving in Hawaii, they were successful in converting many Hawaiians to this new religion - including Queen Kapiolani, wife of King Kalakaua. One day she decided to show her people that Pele wasn’t real, so as to break the superstition. She did so by marching to the Kilauea Volcano at the Halemaumau crater. There, in the face of the bubbling hot molten lava, the Queen openly defied Pele by not only omitting the customary offerings, but read passages from the bible. Guess what happened? To the great surprise of her trembling onlookers, nothing happened. There was no wrath or revenge of Pele as everyone else had expected.

But just as you were about to agree with Queen Kapiolani that Pele is just superstition, Let me tell you another story that might just change your mind. This story was written by Herb Kane, a famous local Big Island artist and historian.

As the story goes, in the late 1800’s, there was an American sea captain who had a ranch on the slopes of Mauna Loa. One day while riding his horse, he came across a cave with a curious looking stone resting on a mat. Not believing in the superstition of Pele, he took the lava rock home and put it in his garden. His Hawaiian friends, upon hearing this, pleaded with him to return the stone, claiming that it was a sacred object, placed in the cave to worship Pele.

Being a strong Christian and stubborn man, he refused.

Shortly after, Mauna Loa erupted and a river of lava covered part of his ranch. The man’s Hawaiian friends came, begging with the captain to return the stone. But again he refused to do so. That night Pele’s lava changed course and approached this man’s house. But firm in his faith, he stayed put, with his hands clenching the bible throughout the night. Smoke and heat filled his house like an oven, yet he stubbornly remained in his house all through the night.

When the friends returned the next day, to their surprise, the lava flow had forked right before his house, leaving him and the house untouched. They found him sitting on a chair clenching his bible. With a stern look on his face he said “God has saved me.  What do you think of your Pele now?”

The friends responded “we are happy you are alive. But the stone is no longer in your garden. As we left last night, we took the stone and returned it to its proper place.”

After that, the American sea captain was never the same again.

Check out our other Big Island Tours!