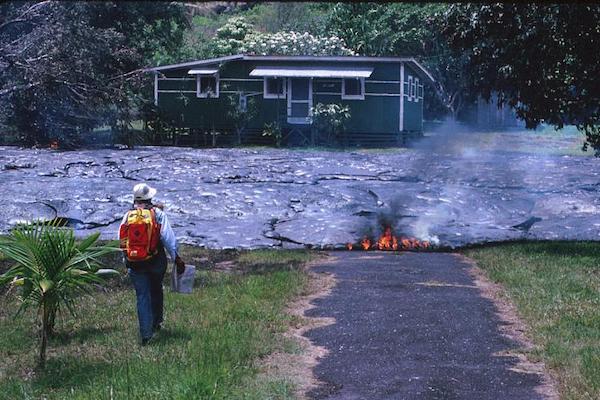 Kalapana: The Village Destroyed By Lava - Then Reborn

Only about 20 years ago in 1986, a lava flow went through Kalapana and destroyed 180 homes, schools, parks and roads. In fact, the entire village of Kalapana, as well as the nearby beach, were buried under 80 feet of lava.  It was the most destructive volcanic eruptions in the recorded history in Big Island.

One man who lived in Kalapana chose to stay put as he watched lava flows destroy his neighbors’ homes one by one. By luck or by chance, he was spared every time. Eventually, all the neighborhood houses were claimed by lava. He was literally the last man standing. But the lava flow had put his house in such a low spot that the incoming flow was inevitable. In 2014, with approaching lava on all sides, he was forced to pack up his stuff and leave. When he saw his property again from a helicopter, the only thing left was a tin roof and his water tank.

But again, whenever there’s destruction, there is rebirth. Life is resilient! After the tragedy of Kalapana, one local resident, an older lady, was inspired to reestablish the lava-ridden village by planting thousands of coconut trees and palms. Even when faced with a terminal illness, this lady continued her vision with a fervor and encouraged the community to join in. After she died, the community continued her vision to turn Kalapana green once again.

Despite the fact that people living in Kalapana are threatened by lava, the cheap land here is a draw and hard to pass up! Now, believe it or not, there is already a small village of houses being built on top of the recent lava field where homes were previously destroyed, making it some of the youngest land on Earth that holds a neighborhood! I guess the people here just decided to take their chances with Pele and cross their fingers that she won’t decide to send lava this way again.

The end of the road is where you’ll find the current edge of the town where the road was cut off by hardened lava. That area further is the Kalapana lava flow that destroyed 180 houses. The road dead ends ahead but there is a path to the Kaimu beach, formed during the same eruption making it a very young  beach. The Kaimu Beach is not suitable for swimming, but you can take a walk on the lava rock and enjoy the amazing views. You might feel like you are standing at the end of the world!

On the lava, you might spot the circles of rocks that some residents have dedicated as a UFO landing pad and star visitor sanctuary. Yep, we're not joking. The residents say, “we aren’t crazy, we are just open minded.” So I guess if there is anywhere on the island where aliens are likely to land, this would be the place! Why not? Ya know... because they already have a landing pad.

Also at the end of the road are a couple of local places for some food, smoothies, and snacks. The food is decent, but expect tourist prices. You can also find an assortment of local vendors here, including House of Fire - a neat art gallery. Also, there is a fun open air market every Saturday morning and Wednesday nights, with live music and great local food. So if today is Wednesday night, you may want to return back here after the lava viewing area to check out the festivities.