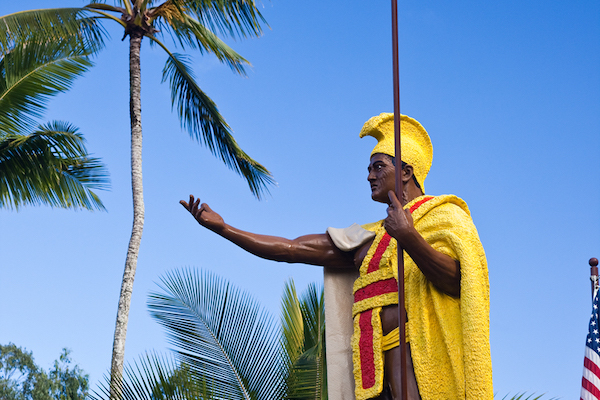 The Naha Stone: The Stone that Proved King Kamehameha's Worth

So, by blood, Kamehameha was considered a lower ranking Ali’i - or chief - in his youth. But he was still anxious to show his supremacy. In his Big Island village, there was a legendary stone that weighed over 5,000 pounds called the Naha stone. People believed that this stone had a spiritual power, or mana, and that whoever could lift the stone would become a Hawaiian king. However, if unsuccessful, the person would face death. Like the Sword in the Stone… but with much higher stakes.

The ruling chief did not think Kamehameha was worthy even to attempt this feat, but brushing all opposition aside, at around the age of 30, Kamehameha was apparently able to successfully lift the stone and turn it over.

As the years passed, Kamehameha learned the art of warfare, and rose to become a great warrior and political leader.

Standing over 7 feet tall and very strong, firsthand accounts describe Kamehameha as a man that “moved in an aura of violence.” Despite being intimidating, he was also a very wise and resourceful young warrior.

Eventually, Kamehameha would famously go on to conquer all the Hawaiian islands, and place them under his rule. We mention more about Kamehameha on the Kohala Loop Tour. But some say his rise to fame all started when he was able to lift this massive Naha stone.

The Naha stone still exists - a long rectangular stone lying down on the grass in front of the Hilo Public Library. As previously mentioned, Kamehameha is said to have lifted the legendary stone to prove his supremacy as a great king. Man, can you imagine lifting a 5,000-pound stone? Kamehameha must have been one big Hawaiian boy! It was also believed that the Ali’i, or chiefs, would ceremonially put their newborn baby on the stone. If they didn’t cry, then it was thought that the child would grow up to be a great Ali’i. Kinda neat, huh?