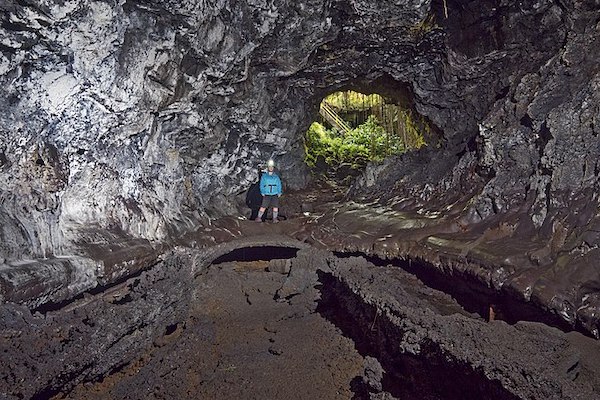 Let us tell you how the beautiful Kaumana cave was formed. The massive cave is part of a 25-mile-long lava tube created by the Mauna Loa lava flow of 1880.

Lava tubes are formed when slow-moving lava develops a hard crust on the outside, while fresh lava continues to flow inside. When the eruption finally stops, the lava tube empties out and becomes hollow. Seems harmless enough, right? Well, the Kaumana caves lava tube once carried lava that threatened to destroy Hilo!

In June 1881, lava had been flowing for 7 months - and was within 5 miles of Hilo! Residents knew they were directly in its path. They sent for Princess Ruth Ke’elikōlani, a member of Hawaii’s monarchy. Princess Ruth still practiced the traditional Hawaiian religion and believed in Pele, the goddess of the volcano. The people wanted her to ask Pele to stop the lava. Standing 6 feet tall and weighing over 400 pounds, Princess Ruth was carried by her servants into the hills above Hilo, where she camped out in front of the approaching lava. She chanted and offered tributes to the goddess Pele, and miraculously, the lava stopped. To this day, Hawaiians credit her for saving Hilo.

The part of the cave that is open to the public stretches for about 2 miles. Sunlight doesn’t get too far into the cave, so it gets dark! The cave is damp, and sometimes muddy from all of the Hilo rain.

The cave is accessible by a concrete staircase where there stands a large cathedral-type opening, overgrown with plant life. The cave continues for a mile in one direction, and 2 miles the other direction. While exploring, one can notice the roots hanging from the ceiling. These are from the plants on the surface above the ceiling of the tube. If you look at them from the right angle, they have a fluorescent glow – it probably comes from a type of glow-in-the-dark fungi.

Want to explore the Kaumana cave?