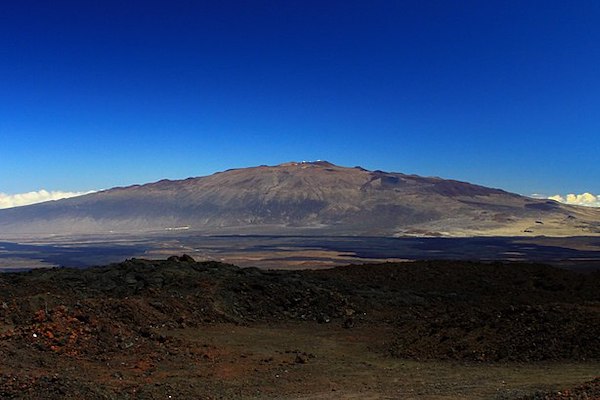 The name Mauna Kea means “white mountain,” and refers to its year-round snow-capped peak. Speaking of weather, did you know the Big Island has 4 of the 5 major climate zones, and 8 of the 13 subzones found on the planet? These climatic differences are noticeable in that Kona is hot and dry, Hilo is a tropical rainforest, and, well, Mauna Kea is cold and windy like the North Pole. It’s pretty amazing that such a relatively small island has such a diverse climate!

Despite the cold conditions, Mauna Kea is home to a few plant and animal species that have evolved to survive - endemic to Hawaii, and live nowhere else in the world.

One of them is the Mauna Kea Silversword, a tall, globe-shaped woody herb. It grows a stalk that reaches lengths of 6 feet, which eventually fall off, and resemble a sword - hence the name. Incredibly, this plant has a lifespan of 40 years, and still, the only time it flowers is right before it dies. It likes to go out in style!

These amazing plants were almost grazed out of existence by introduced goats, pigs, sheep, and cattle, as early as 1892. There is a small, fenced conservation habitat behind the visitor center where you can see this unique plant.

Another curious species at the Mauna Kea summit is the Wekiu, a flightless seed bug. These insects live only at high altitudes. As their name suggests, seed bugs normally eat seeds, but with no native seed-bearing plants this high, Wekiu evolved to survive on the carcasses of other insects which are carried to the summit by the wind. They endure the freezing temperatures, because of a natural antifreeze in their blood.

On the mountain, the floral communities are described as sub-alpine up to around 9,500 feet, then alpine above that. But the stretch up to the summit is known as an ‘alpine stone desert.’ The only things that survive there are mosses, lichens, algae, and a very few hardy plants that can handle the harsh conditions - such as a lack of water in the cindery soil and the intense uv from the sun... plus the Hawaiian Hoary Bat, which has been observed flying near the top of Mauna Kea.

One lesser known fact about Mauna Kea is that it was used as a training ground in the 1960’s for the Apollo astronauts’ lunar mission, because the surface there is considered a fairly good replica of what the astronauts would experience on the moon. If you have ever had dreams of going to the moon, your visit to Mauna Kea may be the next best thing! At least, according to NASA.