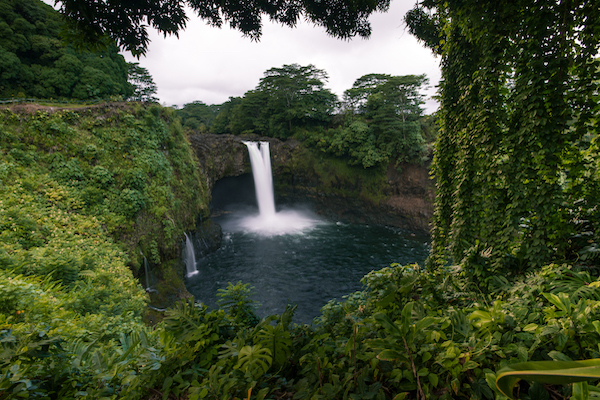 The Legend Behind Rainbow Falls & The Boiling Pots

Rainbow Falls is truly a breathtaking sight, with a drop of 78 ft and a basin diameter of about 33 yards. During the rainy season, water is thrown over the falls at great speeds, making the basin a torrent of whitewater and misting bystanders. If you get lucky, you may see rainbow colors reflected near the waterfall in the clear morning sun... hence the name Rainbow Falls.

There are many legends about Rainbow Falls. One of the most well-known stories is about the goddess Hina, who is the mother of the demi-god Maui. Behind the falls, there is a huge cave - where people believed Hina used to live. One day, Moʻo Kuna, a big lizard that lived in the Wailuku river, threw a huge rock into the river mouth, blocking the flow. Hina sensed that the cave might be submerged by the rising water level of the river, and cried for Maui to help. Maui quickly paddled his canoe to the mouth of the river, and destroyed the rock with one swift blow - saving his mother’s life.

But the story did not end there.

When Hina’s son Maui rescued her, he then chased the giant lizard all the way from Rainbow Falls upstream to the Boiling Pots - another waterfall off of the Wailuku river. Maui asked Pele - the goddess of fire - to heave lava into the river to get him out. When the lava hit the river it started boiling, evaporating all the water, and exposing the lizard’s hiding place. Maui was finally able to kill Mo’o Kuna, with one swift blow. The boiling water drove Mo’o Kuna out of his hiding spot, and also gave the Boiling Pots a legendary name.

Others explain the origin of the Boiling Pots name from little terraced pools; when it rains a lot, the water becomes turbulent, making the pots appear to be boiling. But we like the legend better!