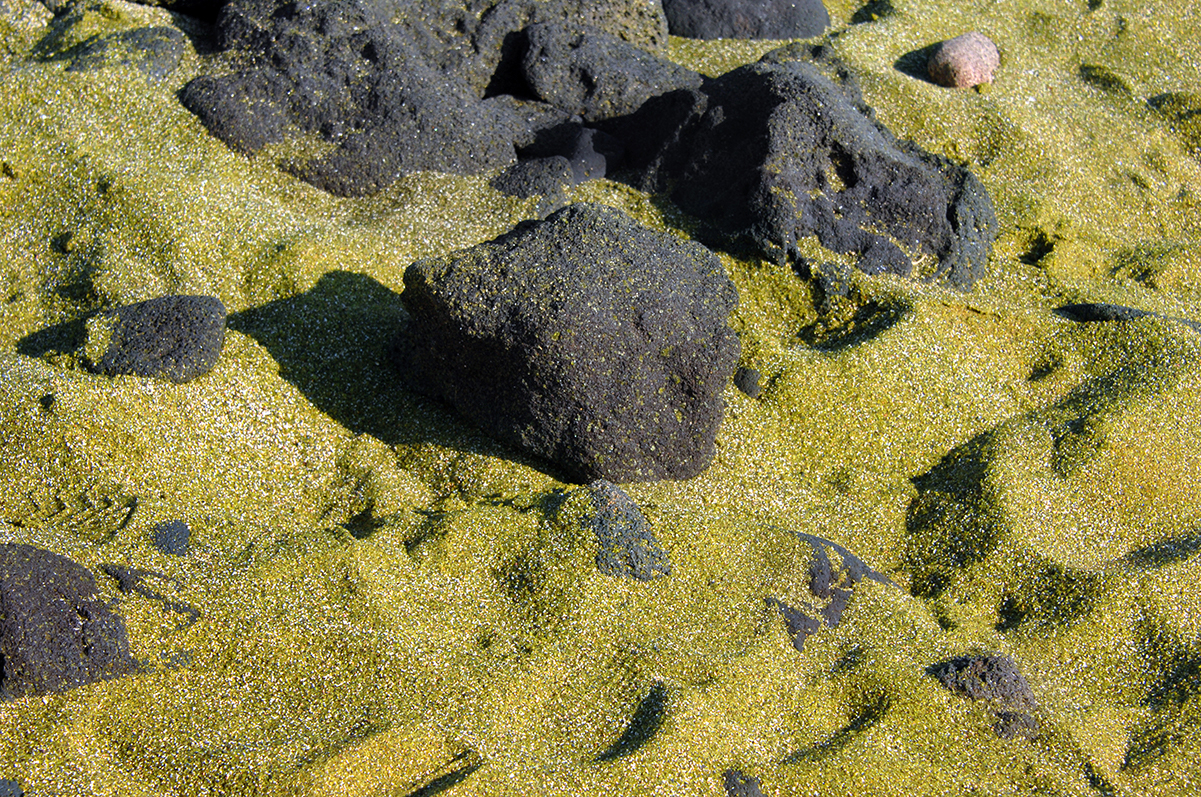 Discover the Colorful Sands of Big Island with Shaka Guide 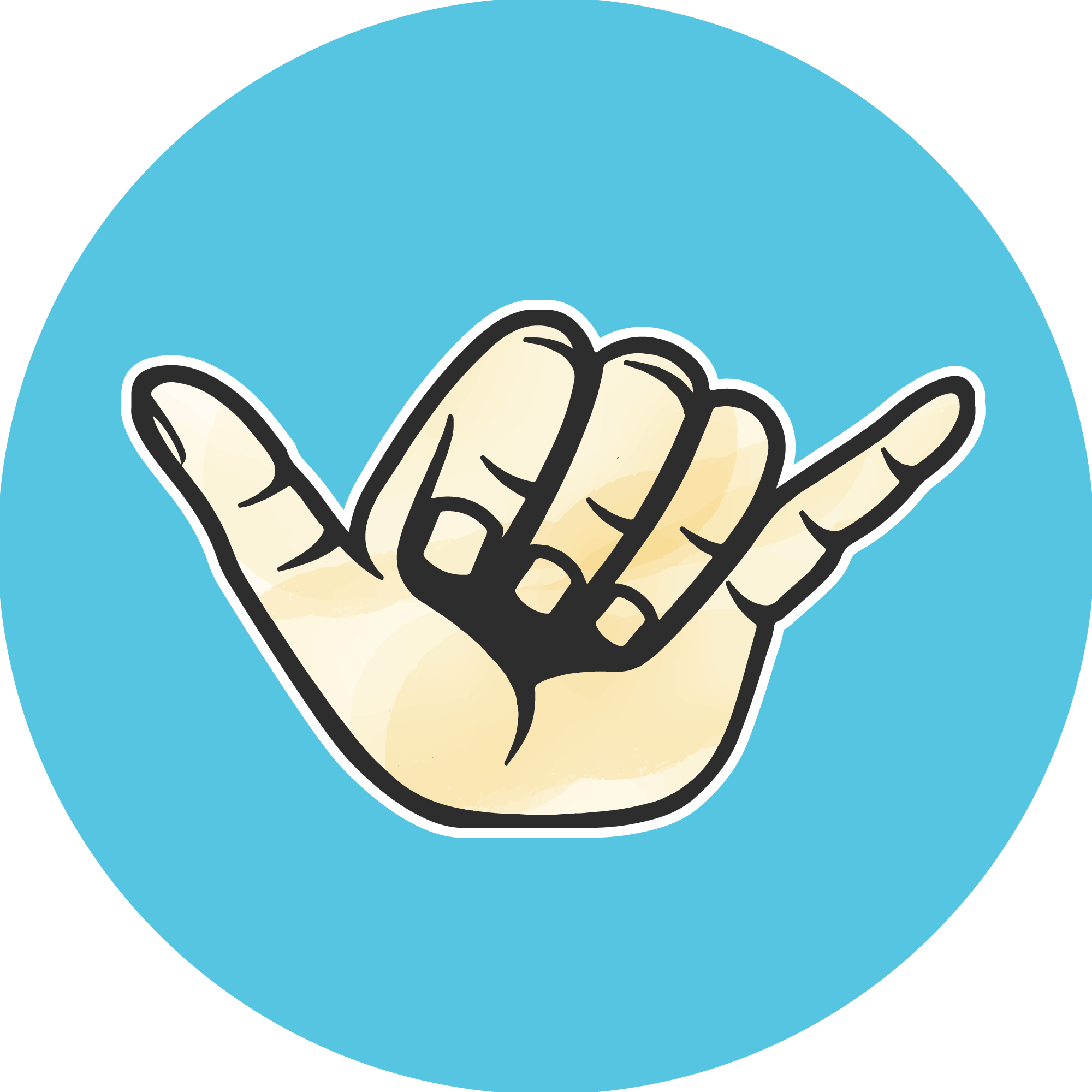 The Big Island of Hawaii is a hot spot of terrain diversity. Expect a range from snow-capped mountain tops, to miles of dramatic rock cliffs spewing hot lava. There are also jungles so thick you can’t even walk through it and desert land scattered with white coral. It’s no wonder that you can find a plethora of different colored sands of Big Island! Hues of the typical yellow and white sand are not the norm here. The largest beaches are actually filled with black sand! And to take it even a step further, you can even find green sand. Learn a little about the unique colors of the sands on the Big Island. Check out our guide and know where to go to see them for yourself! 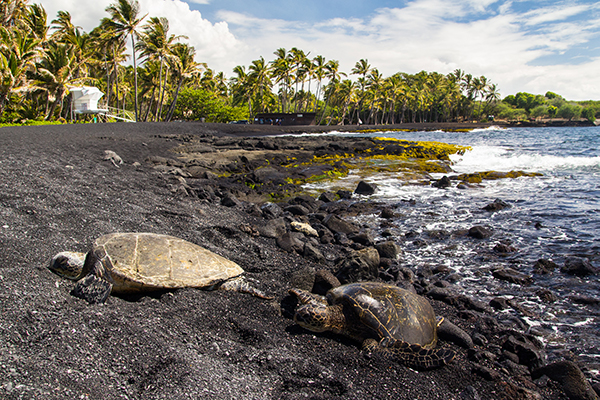 You can find the richest hues of black sand at Punalu’u beach towards the southern tip of the island. The black sands of Big Island is made from hot magma hitting the cool ocean water and shattering. The black sands are also created from eroding lava rock – which there is no shortage of on Big Island! Punalu’u is known for the sea turtles that love working on their tans and basking in the sun. It’s also one of my favorite swimming spots, and you can drive right up to it! The iconic Waipio Valley on the Hamakua Coast also has deep black sand, speckled with rainbow colors. It is a great place to picnic and admire the majestic sea cliffs! Be ready for a steep walk down (and back up!) if you don’t have a four-wheel drive vehicle. 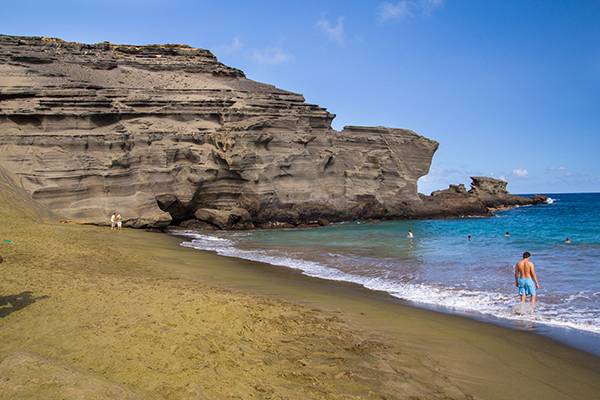 If you are up for an adventure, Just past Punalu’u Beach, you can head to South Point, the southern most point in the United States, where there is actually an entire beach filled with green colored sand! That is right green sand! It is only 1 of 4 beaches likes this in the entire world.

To get there head to South Point. It is paved for part of it but eventually turns into a bumpy 2-mile four-wheel drive ride (or walk) to Papakōle or Mahana Beach, more commonly known as Green Sands beach. I don’t recommend walking it because the sun can be brutal. Usually there are locals there with 4WD vehicles that you can get a ride with for $20 a person. It is kinda pricey but it may be worth it as a once in a lifetime opportunity to see green sand.

When you get there you will find a dramatic wind-carved-rock cliff side, spilling olivine colored sand to the beach below. This beach was formed 49,000 years ago and is actually an old cinder cone. The old volcano used to spew olivine-rich lava, which now remains trapped in the bay. This olivine mineral is what makes the sand green. I love walking around on the rock formations, and sliding down the steep hill of green sand down to the water (bring a boogie board if you have kids 😉 – or even if you don’t.)

RELATED: The Best Snorkel Spots on the Big Island 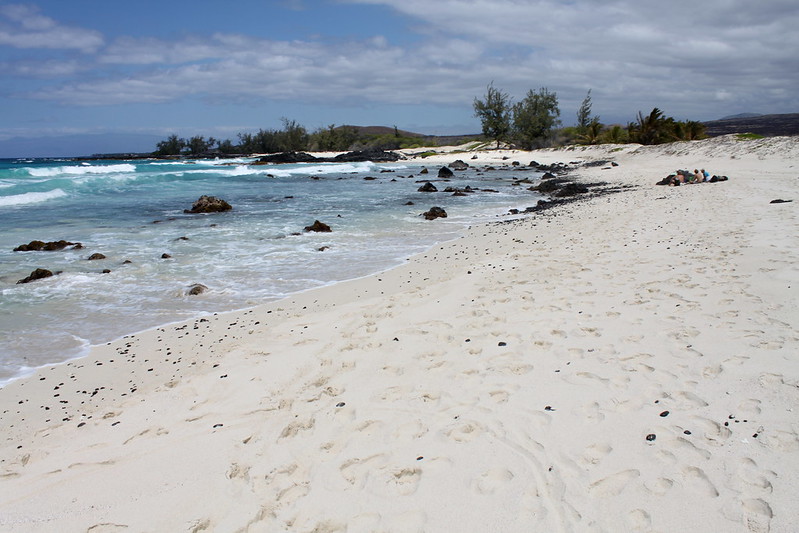 You can find white sand beaches scattered all over the Kona side of the island, but if you want to get away from the resorts, my favorite lesser known beach is Makalawena (W is pronounced as a V in Hawaiian). The easiest way to get here is from Kekaha Kai Sate Park. White sand beaches are typically formed from eroded coral and other marine fragments. Even though some of this beach is outlined with black lava rock, there is enough coral being washed up and eroded here for a full beach of palm-lined white sand. This, my friends, is my go-to spot for camping, and nothing can beat an early morning sunrise followed by a refreshing dip in the ocean – without the crowds!

When you're in Hawaii remember that the beaches and marine life are fragile. Please show your aloha by wearing reef safe sunscreen, respecting the animals - don't get too close or touch them EVER - and by leaving the beach better than you found it. For more on how to be a safe and responsible traveler when you visit Hawaii, click here.

RELATED: According to Our Research, Shipman's Beach is the Big Island's Most Underrated

Shaka Guide has FIVE audio driving tours on Big Island! Explore the island with Shaka Guide to visit the beaches, historic sites, scenic hikes all while learning about Hawaii's history along the way!