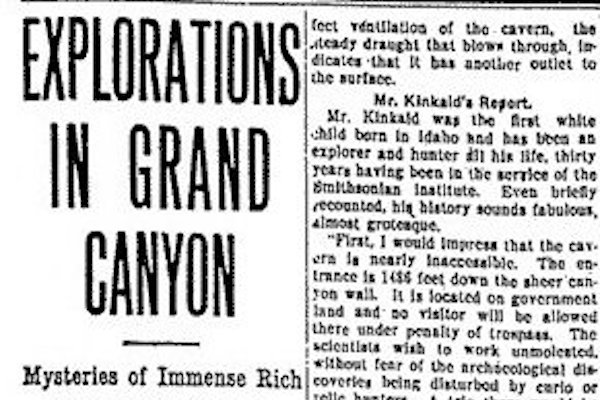 The Hoax of 1909: Egyptian Artifacts in the Grand Canyon?

We here at Shaka Guide really enjoy a good mystery story. One of our favorite Grand Canyon mysteries is the great Hoax of 1909. Never heard of it?

On April 5th, 1909, the Arizona Gazette newspaper ran a story about a strange discovery at the Grand Canyon. According to the article, two archeologists from the Smithsonian Institute in Washington, DC discovered a series of hidden tunnels under the Marble Canyon region. The archeologists - Professors Jordan and Kincaid - stated that they found hundreds of Egyptian artifacts in those tunnels that dated back to the era of the ancient Egyptian king Ramses, somewhere around 1250 BC. Historians believed the first people to settle at the Grand Canyon were the Ancient Puebloans, but these artifacts would mean the first settlers were actually Egyptian! So, a discovery like that would have completely changed history! Also, how did the Egyptians even get to North America back then? 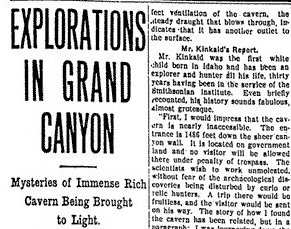 Needless to say, there might've been a few discrepancies in that story. There were three main problems with the article. First, it didn’t have any photographs of the artifacts. For such a historical breakt hrough, you’d think that there would be at least one photo, right? Two, the Smithsonian had no record of receiving any artifacts from an excavation at the Grand Canyon. Even in those days, museum professionals kept very careful records of every single artifact they received. Yet, they had no record of any Egyptian artifacts ever being found anywhere in North or South America. And finally, those Professors Jordan and Kincaid - or whoever they claimed to be, did NOT even work for the Smithsonian. Turns out, neither man even existed.

So what’s the scoop? More than likely, it was a made-up story. The most popular theory is that April 5th, 1909 was just a slow news day, and the reporters at the Arizona Gazette got creative in order to sell a few more newspapers.

To this very day, some people think that the whole thing did happen, and that the Smithsonian covered it up. But why? Well, maybe they were afraid to rewrite history. Maybe the professors found something even more incredible? Maybe there’s an entire race of lizard people living underneath the Grand Canyon. We're... not holding our breath on that last one. There are new scientific discoveries happening every day though, so who knows?