What is Hawaii’s most dangerous natural hazard? No, not volcanoes. Not earthquakes. Not hurricanes.

Tsunamis are by far Hawaii’s most dangerous natural hazard, having killed more people over the past 200 years than earthquakes, volcanoes and hurricanes - combined.

The Hawaiian Islands sit right in the bullseye for tsunamis generated all around the Pacific rim coming from Alaska, Chile, Japan and even the southwest Pacific.  But not only are we struck by tsunamis from all those far-away places, but we create our own tsunamis right here in the islands.

We have records of deadly tsunamis striking in 1837 and 1868, but the greatest loss of life from a tsunami here in the islands was on April 1st, 1946.  That tsunami was created by a large undersea earthquake off the Aleutian Islands of Alaska.  It crossed the North Pacific, first striking the Island of Kauai.

James Ohashi was on the lanai of the cottage where he lived with his mother and sister at Nawiliwili Bay on Kauai when, “I noticed some strange sounds from the stream below... I said, ‘mother come see the ocean, it’s acting funny.’  My mother stepped out the front door and as soon as she saw the bay, she immediately knew there was going to be a huge wave, a tsunami.”

James and his mother and sister rushed out the rear door toward high ground. “We were on our hands and feet clinging to tree trunks as we hurried up the hillside.”  Once they reached the dirt road 75 feet above their cottage, they looked down to see something they had never seen before - the bottom of the bay.  Then the 2nd wave came, “..it was humongous...with tremendous sounds and speed, knocking everything in its path.  The number two wave was a killer.  It had no mercy.”

They watched in horror as their cottage fell apart “like a matchbox.” James can never forget that morning: “I watched the demon destroy us and take everything from us like a thief without a conscience.  Mother saved us.”  But the demon killed 17 people on the island of Kauai and it was just getting started.  It was now headed for Oahu.

At La’ie on the northeast shore of Oahu, 15-year-old Ahi Logan lived on his family farm.  When he saw the first wave surging in, he climbed up a big ironwood tree from where he watched as the wave receded, “..leaving all the reef exposed.”  After a few minutes the next wave came roaring in, “a huge wall..three or four times bigger than the first wave.  It washed through the house, over the highway and 200 feet beyond me.  The water receded again and then the third wave came roaring in “and it just demolished the house...just wipe it out.”On Oahu, six people were killed by the tsunami, but it wasn’t finished and the Island of Maui was next in line.

Nine-year-old Jared Kaholokula lived with his family in their house on Maliko Bay, Maui.  He and his brother were walking up to the school bus stop, when “…we saw the water coming in very, very slowly, just like one small wave just coming inside.  But my father knew something was up, so he grabbed my younger brother and my grandmother, and he told us to go, go up towards the mountain... so we all took off, up that mountain and the water was about to reach the house... it was a very small wave, but it just kept building up, building up.  Shucks, I don’t know how big it was, but it just took the house and lifted off the foundation and just crushed it and all the lumber just flew up 20 to 30 feet up in the air and then the whole thing just went down in the ocean. It was a tremendous wave.”

They kept watching from their safe spot up high, “and I think I counted about 13 waves. When it was finally over they realized that “we didn’t have nothing, we lost all our clothes everything, the only thing that we owned was the things that was on us... we was homeless and didn't have no money no nothing.” But they had survived. Others would not be so lucky. The tsunami took 16 lives on Maui, but the tsunami had saved the worst for last.  The waves were now headed for the Big Island.

The SS Brigham Victory was tied up at the main pier in Hilo harbor when the tsunami waves began to rush in. The first wave broke several of the mooring line holding the ship to the pier, so the First Mate had the engines started to prepare to escape from the harbor. By the time the biggest wave struck, the ship had full power, but one mooring line was still holding it to the pier.  A worker on the dock, Antone Correa Aguiar, rushed to help and just as he had finished untying the final line holding the ship, the 3rd and largest wave struck. Antone was washed to his death, but his heroic act had saved Hilo from even worse devastation as the ship’s cargo included 50 tons of dynamite and blasting caps.

In Keaukaha, a few miles down the road from Hilotown, six-year-old Jeanne Branch and her younger brother David were staying with their grandparents and their Uncle Rod. They were headed down to the street to fetch the morning paper, but their yard was flooded. They came back in the house, and when Jeanne looked out the kitchen window, she saw that the water was now up to the clothes line. Her Uncle Rod picked her up and carried her through the then shallow water, with David complaining at having to walk as he struggled beside them. They were joined by other people who were wisely heading inland away from the ocean. They had obeyed nature’s warning and it saved their lives.  They were among the lucky ones on that April Fools Day. Down at Laupahoehoe point 24 people were killed, including 16 students and five teachers at the school. But Hilo had the greatest losses with 96 deaths from the tsunami. In all 159 people were killed across the islands. 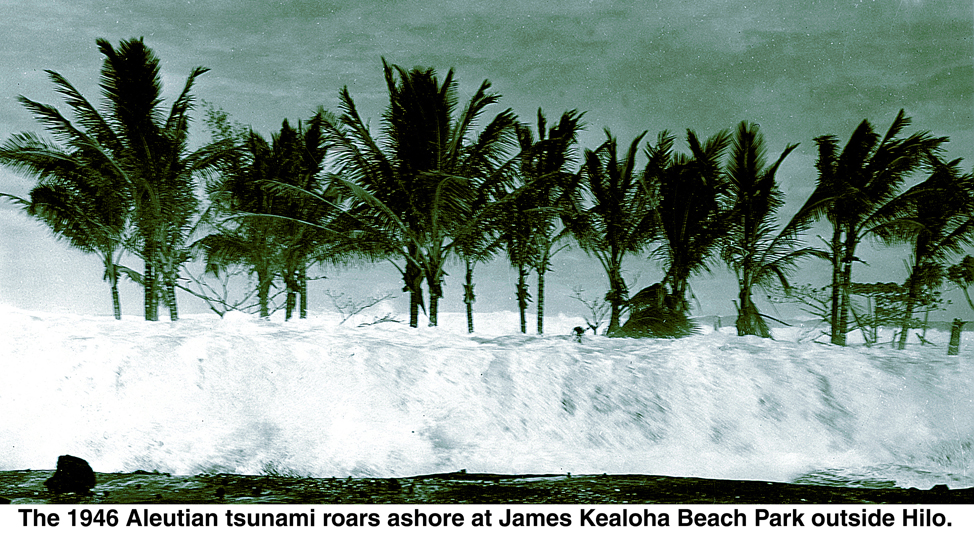 The tragic loss of life from the 1946 tsunami resulted in the establishment of the Pacific Tsunami Warning Center in 1948, but sadly many people didn’t take the tsunami threat seriously. In 1960 a tsunami generated off Chile struck the islands.There was a tsunami warning, but many people didn’t evacuate to high ground and some even went down to watch. That tsunami killed 61 people in Hilo.

The next deadly tsunami to strike Hawaii was created right here in the islands when a 7.2 earthquake struck off Kalapana on the Big Island on November 29, 1975. Tsunami waves some 26 feet high crashed ashore at Halape, a camping site in Hawaii Volcanoes National Park where Boy Scouts, college students, fishermen and others were camping. A fisherman and the Scout Master were killed. There was not enough time for the Tsunami Warning Center to send out a warning to those closest to the earthquake.

There are many lessons we could and should learn from past tsunamis that can literally save your life. It’s not “live and learn” but rather “learn and live.”

1) It’s not “IF” another tsunami will strike, but “WHEN” will the next tsunami strike.

2) A tsunami is not a single wave, but a series of waves that can last for several hours.

3) Learn to recognize nature’s warning signs of a tsunami as there may not be time for an official warning for a locally-generated tsunami. These include:

It’s been over 50 years since the last deadly tsunami struck Hawaii and that only makes things worse.  Many people forget about the danger of tsunamis, new residents from out-of-state may not even know about tsunamis, and many of our elders, who experienced past tsunamis and passed on their knowledge, have passed away over the years. On the good side, there have been many improvements in the Tsunami Warning System. There is no such thing as a “false alarm.” If the sirens sound, head to high ground.  Spread the word and help save lives.

The above stories were all collected by the Pacific Tsunami Museum in Hilo to promote tsunami preparedness and help save lives. Not only does the museum showcase exhibits about Hawaii's tsunamis. You'll learn about tsunamis that have struck Alaska, and the Indian Ocean, as well as areas from Canada to the Mediterranean. On display are photographs and numerous short videos of survivors telling their own stories. A tsunami wave simulation tank allows you to create your own tsunami, and a Warning Center exhibit puts you in the shoes of the scientists at the Pacific Tsunami Warning Center. The mission of the museum is to disseminate public education about tsunamis so that “through tsunami education and awareness, no one should ever again die due to a tsunami.”  The museum also serves “as a living memorial to those who have lost their lives to tsunamis.”

To learn more about tsunamis, their history and impact in Hawaii and around the world visit the Pacific Tsunami Museum in Hilo. And, check out Shaka Guide's North Island Jungle Adventure Loop Big Island audio tour where we visit Hilo and Laupahoehoe.