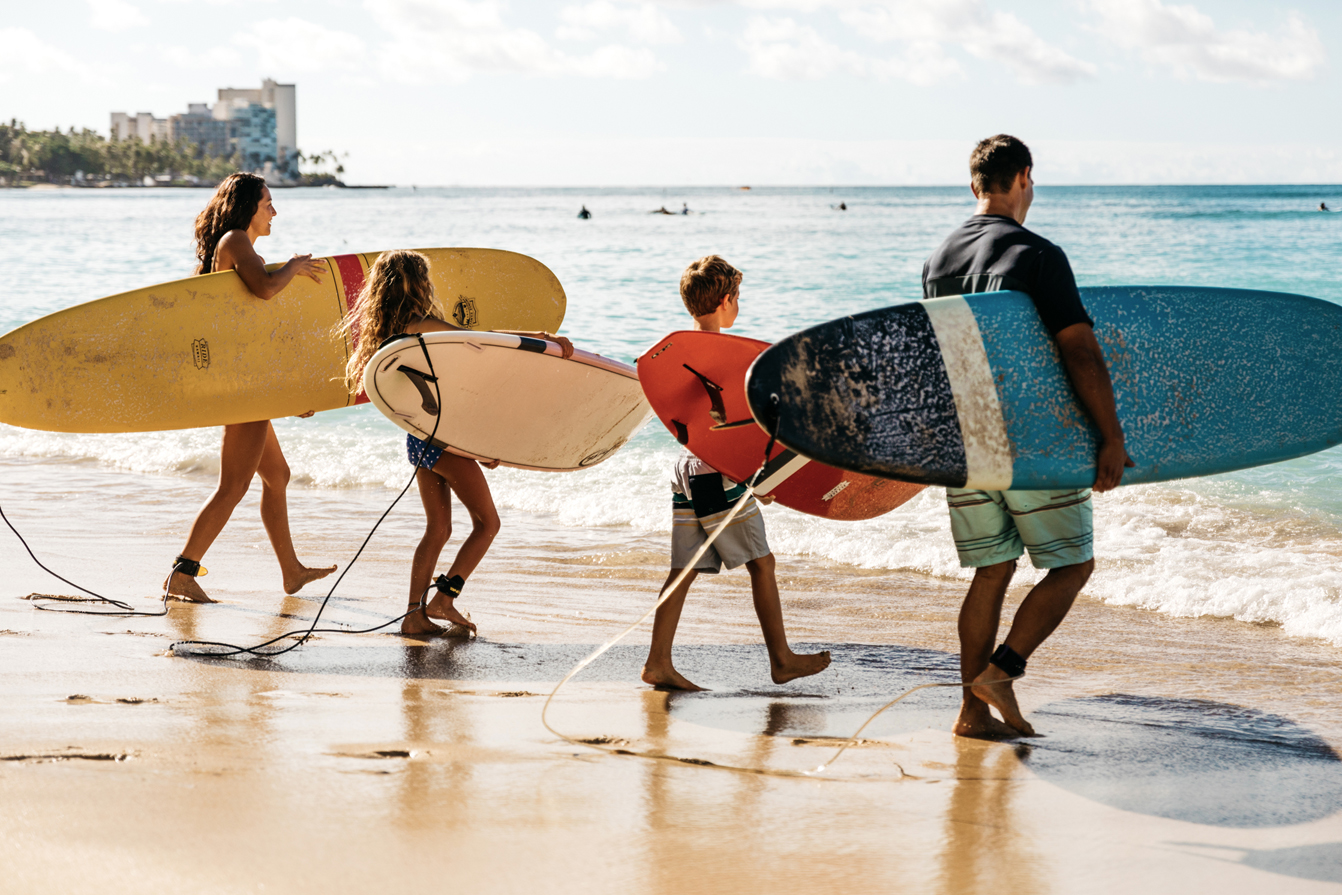 The History of Surfing in Hawaii 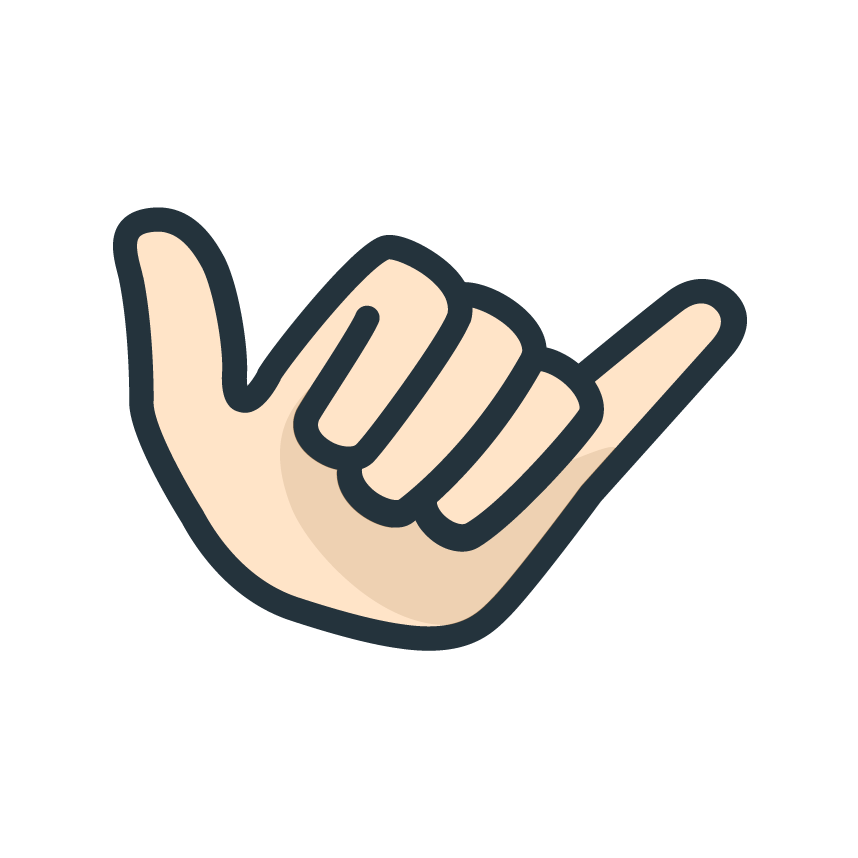 Surfing has taken over the world.

Wave riders from from every nation travel the globe in search of that perfect wave to take them back to shore. Their journey has them challenging reef breaks as they conquer waves and move on to the next location, predetermined by the weather and ocean swells. You might be more familiar with the surf breaks in California and the "Beach Boys", but believe it or not, surfing was invented right here in Hawaii by the Ancient Hawaiians.

History of Surfing in Ancient Hawaii

Before Captain James Cook of England first arrived to the Hawaiian Islands in 1779, the Ancient Hawaiians had already been surfing the island's breaks for well over a thousand years! But instead of being thought of as a sport or a competition, surfing and surfboard building was more of an artistic expression and was closely tied to the Hawaiian religion and their traditional ceremonies.

In Hawaiian, surfing is called "He Nalu" meaning "to slide on waves." And slide they did! The earliest account we have for surfing is from the crew of Captain James Cook. The English sailors watched in awe as Hawaiians - both men and women - surfed the waves on solid wood planks with great skill and ease. Surfing wasn't hard to spot either as the sport was not reserved solely for just chieftains and royalty, but commoners could freely participate as well. 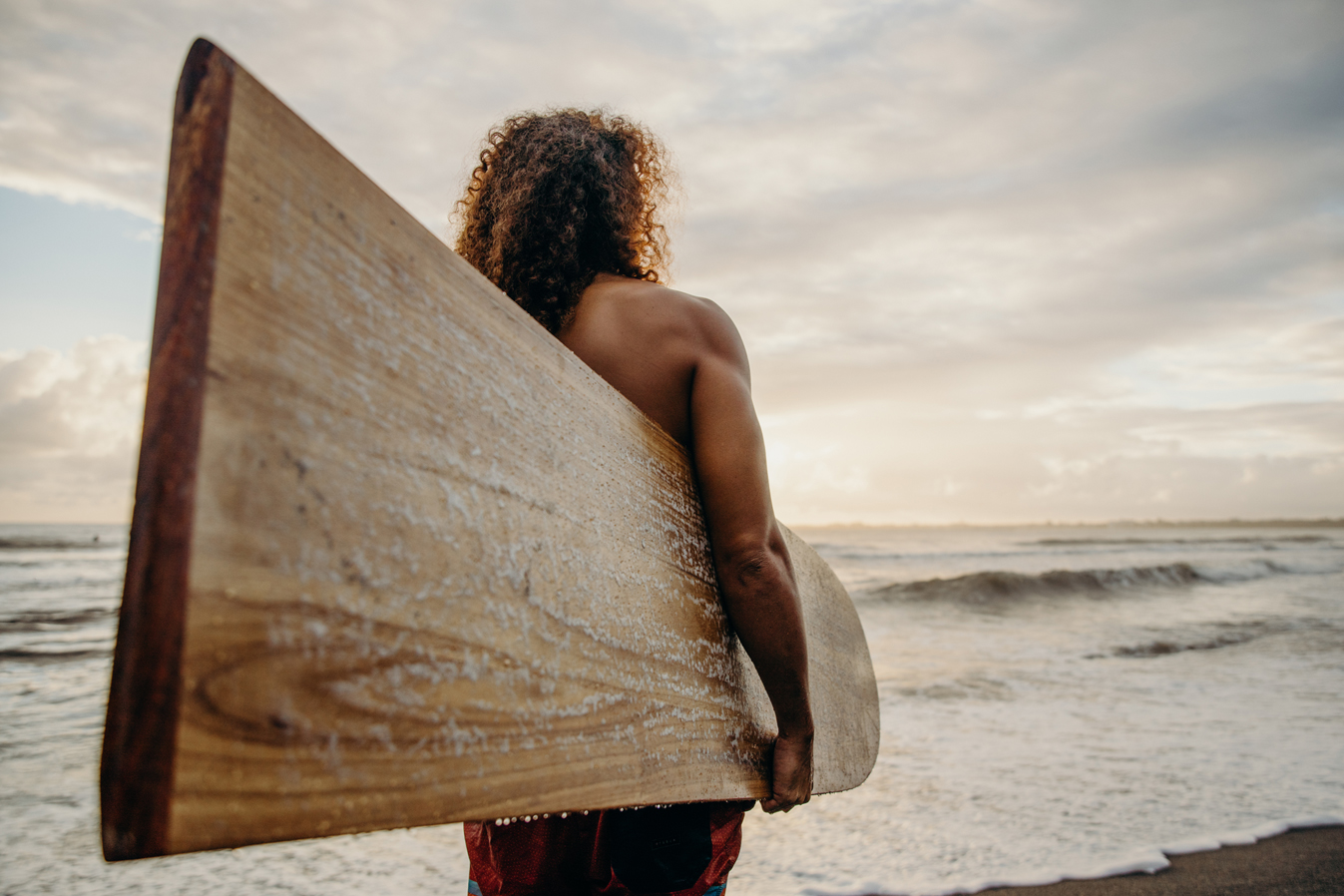 Surfboards have also gone through an evolution just as surfing has changed throughout history. When surfing was first witnessed by Captain James Cook and his crew, the surfboards were made of planks of local wood and measured about 15 feet in length. They were also very heavy, which meant surfing back then was literally sliding instead of today's trick and surfing displays done on modern day polyurethane or fiberglass surfboards.

The shape of the surfboard has also changed quite a bit. These days, most surfers prefer a shorter board made out of lightweight foam and fiberglass. But, when the king of Hawaii was surfing 200 years ago, he would have been riding a 20-foot board, made out of heavy tropical hardwood! That surfboard would be almost impossible for the average person to lug back and forth on the sand, but in the water its natural buoyancy would have made it much easier to navigate.

History of Surfing with Westernization

When Christian missionaries and colonizers first arrived in Hawaii some 200 years ago, they were shocked to discover that men and women typically surfed naked! The traditions of surfing came under attack as it was seen as a sign of laziness and immodesty. Surfing took another blow when diseases such as measles and smallpox wiped out 90% of the native Hawaiian population. As the economy of Hawaii shifted towards pineapple and sugarcane plantations, the small Hawaiian population had little time to relax and play out on the surf. As a result, fewer and fewer people were seen in the ocean surfing.

It wasn’t until the early 20th century, when Hawaii slowly emerged as a popular tourist destination, that surfing came back to its original glory. Many famous Hawaiian surfers demonstrated surfing at the shorebreaks in California and eventually introduced the sport all over the world.

There are many important figures in the history of surfing in regards to Hawaii, but the most famous are two local heroes who were proud to share their Hawaiian culture and love of surfing with the rest of the world. 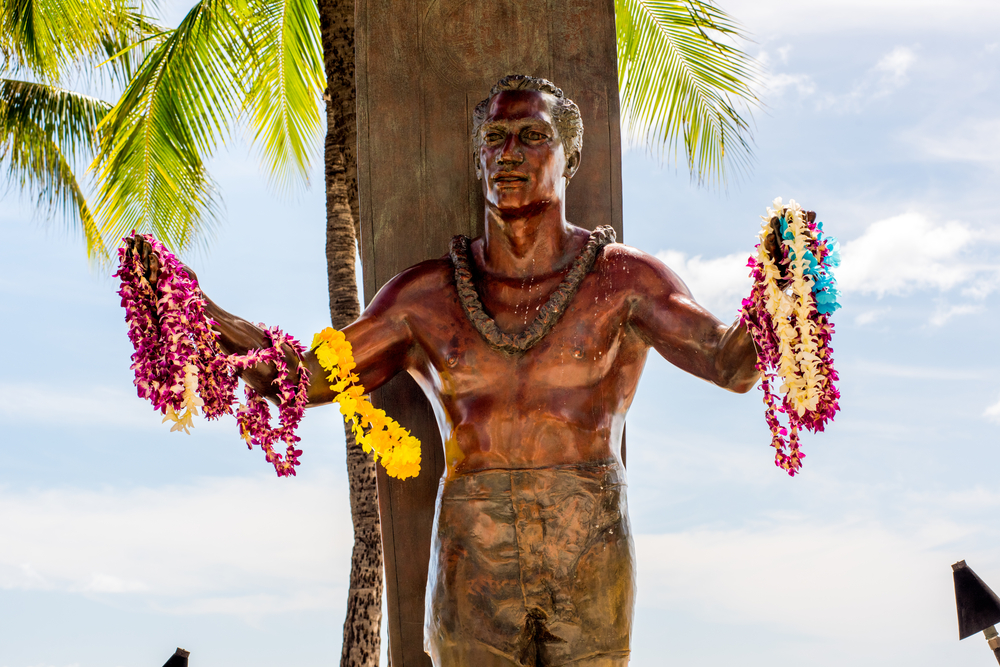 Duke Kahanamoku was a local boy who grew up surfing on the beaches of Waikiki. He was an incredibly strong swimmer and represented the U.S. in the Olympics, winning 3 gold medals, 1 silver medal and even breaking a world record in the 100-meter freestyle in his first race.

After his experience at the Olympics, "The Duke" went on to share his love of surfing with the world by first heading to the east and west coasts of the U.S. mainland. He became an international superstar and was a surfing sensation in the 20th century, putting Hawaii on the map. He also headed to Sydney's Freshwater Beach where a statue of him was erected, solidifying his status as the father of modern-day surfing.

The other famous surfer in Hawaii who helped popularize surfing was Eddie Aikau, who was a pioneer in surfing big waves. He was another local boy who was well known in the North Shore area and braved the enormous waves at Waimea Bay. During his career as a lifeguard, he rescued over 500 people from the ocean and tragically lost his life in an attempt to swim back for help when the boat he was on capsized. "The Eddie" Big Wave Invitational surfing competition is held in honor of Eddie Aikau and receives the green light only when the waves at Waimea Bay reach a certain height.

RELATED: Eddie Would Go: The Store Of The Eddie Aikau Big Wave Invitational 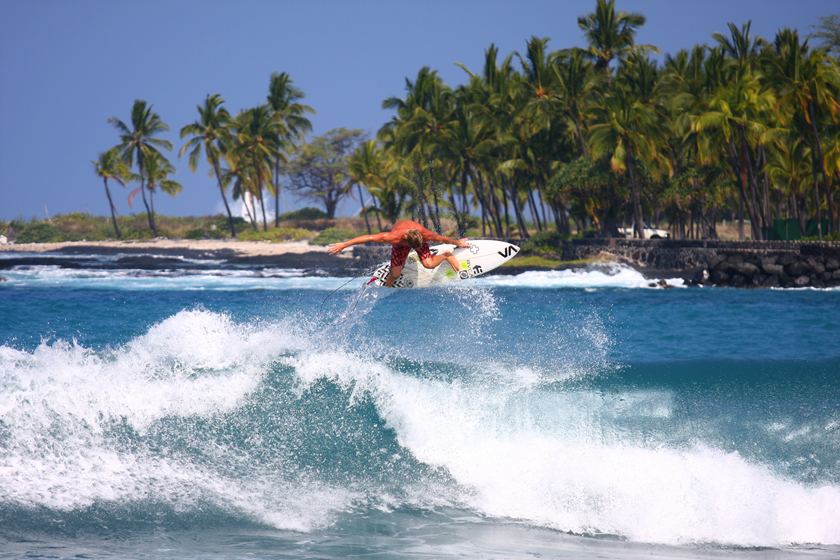 During the surfing boom of the 1960's, surfers began to seek out the biggest and most dangerous waves they could find. Have you seen the classic movie Endless Summer? Some of the most consistently big waves in the world occur every winter on Oahu’s North Shore, which now hosts many international surf competitions - it’s still the place where the best surfers in the world come to show their stuff. If you're going to try to surf up there, please be careful as it is not for the inexperienced!

Surfing at the Olympics

If you're a fan of the Olympics and Hawaii, you might want to know that as of the 2020, surfing is now an olympic sport! Debuting in the 2020 Tokyo Summer Olympics, the very first surfing gold medalists were Carissa Moore from Hawaii, USA and Italo Ferreira from Brazil. What an amazing journey surfing has gone through over the last few centuries! From almost being wiped out of existence, one can only imagine how happy Duke Kahanamoku and Eddie Aikau must be to see their beloved sport loved by so many around the world.

Learning to surf in Hawaii is one of the coolest things you can do on a visit. There are surfing instructors and classes you can sign up for and some even offer private lessons if you need that one-on-one experience to really learn the art of riding the waves. Here's some extra information you should know about surfing in Hawaii so you can have fun and stay safe!

The winter months in Hawaii (November - February) means prime surfing season for all of the north shores on all of the islands. The waves change from the calm summer ocean into monstrous winter waves, sometimes reaching more than 30 feet high! That's about the same height as a two-story house to put it into perspective. If you have a chance to watch professional and well-seasoned surfers attempt these waves, it's a terrific watch!

Sign up for a surfing lesson especially if you're a beginner because your surfing instructor will know which beaches will be safe for you even if you're on the North Shore during the winter (some beaches have natural protection against the big waves). If you'd rather play it safe, the south shores are great during the winter (Waikiki is a popular choice) and are great for those learning how to surf.

Haleiwa and the North Shore 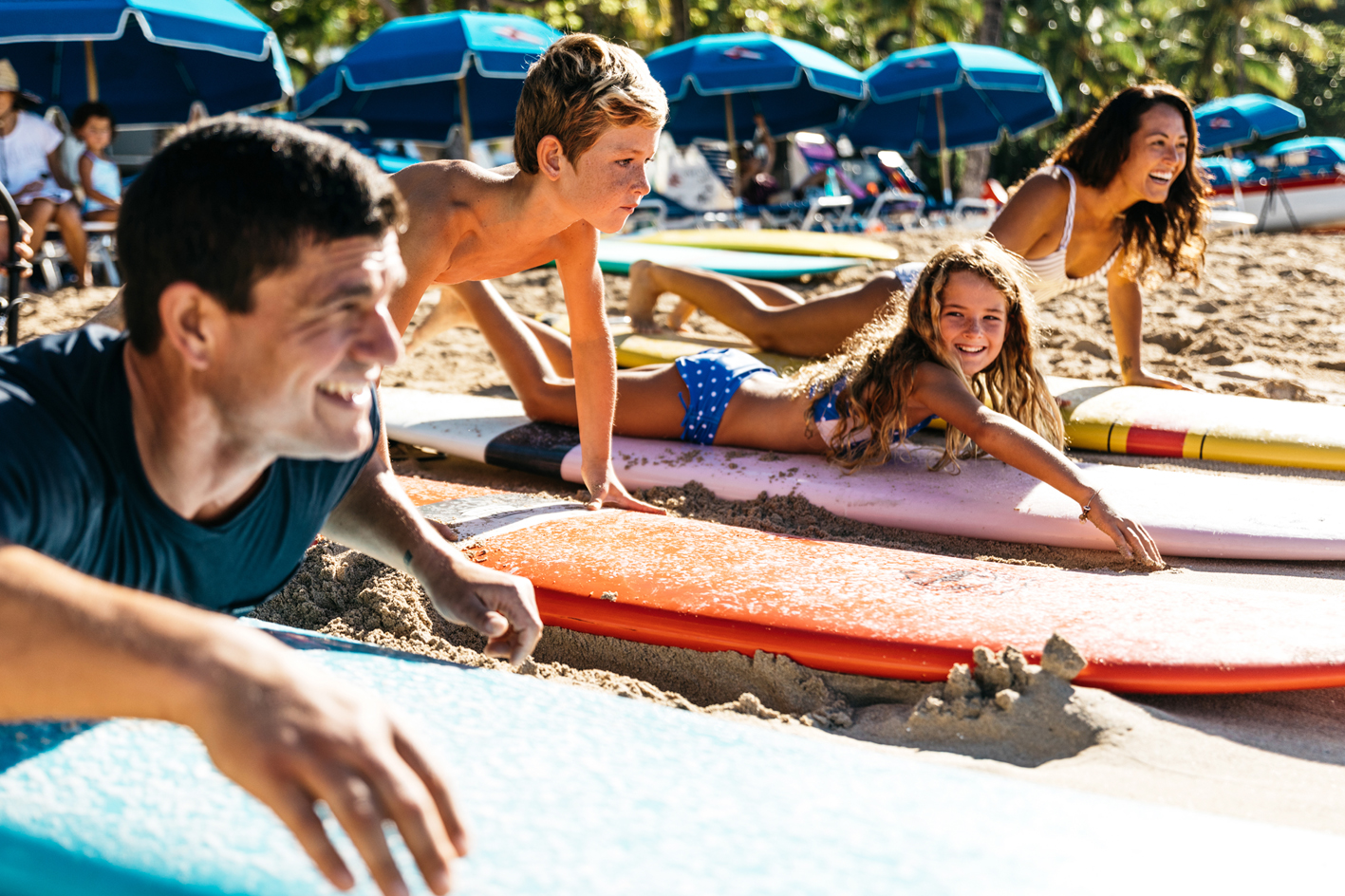 A family learning how to surf together. Hawaii Tourism Authority (HTA) / Ben Ono

Haleiwa is the surf town of Hawaii and is the portal to Oahu's famed North Shore, where you can learn to surf, kayak, SUP, swim with sharks and even see turtles. There are plenty of eateries in Haleiwa Town and the drive along the North Shore coastline is gorgeous and littered with beaches and views.

Waves usually get pretty flat during other times of the year. So don’t be surprised if there are no surfers in sight during your visit. Take advantage of the calm ocean and enjoy sunbathing, swimming and snorkeling. Remember to wear reef-safe sunscreen and enjoy water! 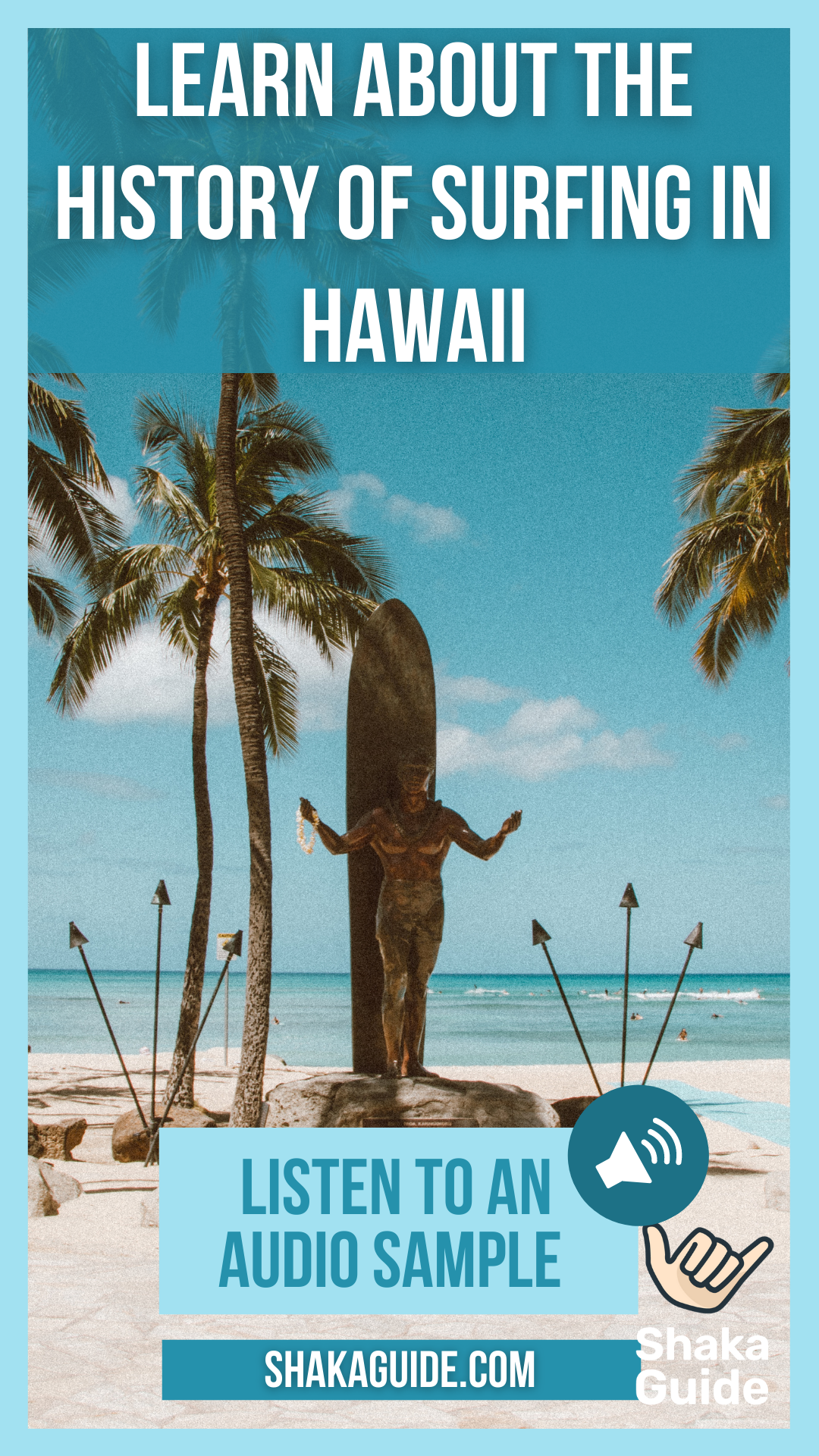