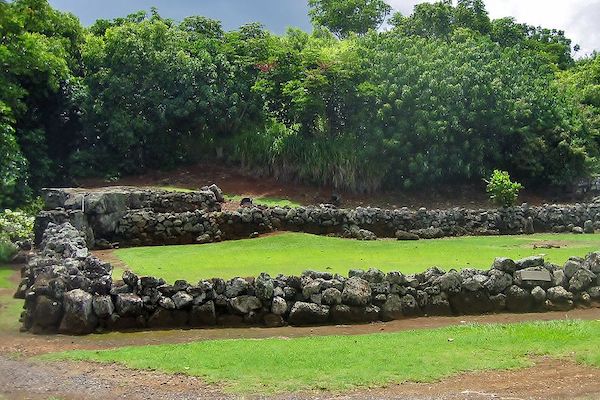 Holoholoku Heiau: Where Human Sacrifices Were Made, and Victories Secured

Alright folks, If you’re visiting Kauai and looking up things to do and places to explore, then why don’t you go and visit the Holoholoku heiau?

I’m going to tell you more about what you would be seeing... relax and let me tell you the story.

Although not large in size, archeologists believed that this Holoholoku Heiau is the oldest temple on Kauai, and of great significance. Different from the other 2 heiaus nearby, this Holoholuku Heiau was a sacrificial war temple - that’s right, a place where humans were killed and sacrificed to the gods. It was done prior to battles to ensure victory, but also at a designated night every month. Usually those who were sacrificed were war prisoners, but at times when there weren’t any, the temple priests would choose an unfortunate person from the village instead. These sacrifices were dedicated to the war god Ku for his blessing of success in wars. The image of Ku was carved on large logs that also stood on the temple ground.

All the scary history aside about this human sacrifice heiau, just on the far backside of this heiau are the sacred birthstones where ancient queens and chiefess came to give birth. Isn’t it strange that places of death and birth were located so close to each other? In the Hawaiian tradition, a chief must be born here, otherwise he would be regarded as a commoner. In fact, legend says that if the child born here was destined to be a great chief, the sky would fill with lighting, thunder, and a downpour of rain. When the storm cleared, a rainbow would appear over the birth area, with one end indicating the exact spot of the child's birth. Very interesting isn’t it? And as a matter of fact, the last King of Kauai, King Kamuali'i was born there.

Want to see the Holoholoku heiau for yourself?