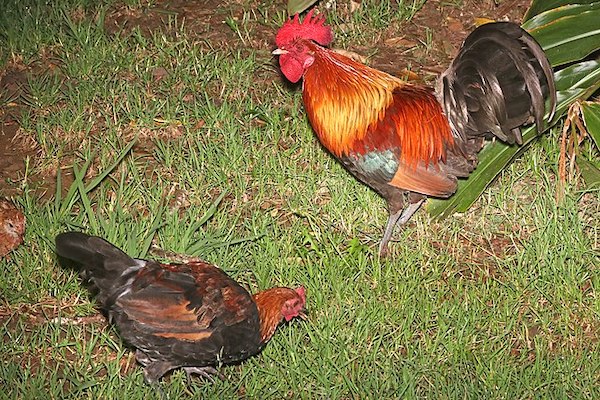 Kauai's State Bird - That Nobody Wants Around

What are your impressions of Kauai? Do you like the rugged mountains, the overlooks, and the clean, sandy beaches? Yeah, Kauai has plenty of those, doesn’t it?

Something else that Kauai also has plenty of - as you might have  noticed - are the seemingly ever-present and colorful wild chickens.

Since the early 1990’s, these pecking and crowing fowl have become the official state bird of Kauai!

These wild KFC escapees have not just crossed the road, but are entirely taking over the island! They are absolutely everywhere! You’ll seen them hanging out at beaches, parking lots, and even flocking in forests! In fact, the local joke goes like this: "why did the Kauai chicken cross da road? Because he owns it, das why!!" Depending on where you stay, they will wake you up even before the crack of dawn. Those chickens are something else!

So what is up with Kauai having so many wild chickens? Where did they all come from? Well, believe it or not, this question has been studied by many scientists - and this is what they found out.

Based on chicken fossils dug up from a cave here on Kauai, scientists were able to determine that the native Hawaiian chickens were related to the red jungle fowls found in asia. When polynesians immigrated to Hawaii and later became Hawaiians, they brought these chickens with them. More recently in  the early 90’s, hurricane Iniki swept through the island and broke down the cages, and coops of many commercial chicken farms. Next thing you know, bodda bing bodda boom, these domesticated chickens quickly interbred with the island’s wild chicken population. The result is a large, interbred ‘godzilla’ chicken that is afraid  of nothing, they are highly resilient in the wild, and they lay eggs like crazy, and multiply like rabbits!

Now, in addition to having superior genes, Kauai’s chickens also luck out in other ways. And that is, there are  no mongoose on Kauai  - unlike   on the  other islands. You know what a mongoose is right? For those who don’t, they look like a long skinny squirrel and are expert egg eaters, especially chicken eggs. So without any natural predator, Kauai’s chickens just pretty much eat, sleep, lay eggs - and go wherever they want! But these chickens are not that welcome around here in Kauai - trust me - you will know what I mean the next time you hear em at  4 o’clock in the morning!

Want to catch a glimpse of Kauai's fearless state bird?