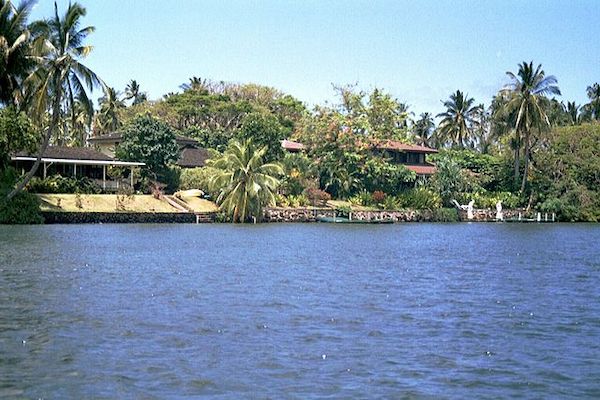 Along the drive on the North Shore, you will see a beautiful view of green pastures. You might also get a glimpse of some huge mansions. It seems many wealthy people seem to like the view of rolling green hills with turquoise blue ocean nearby. We don’t blame them, we would too!

Today we want to give you a little background about Kauai and how it came to be. According to Hawaiian legends, all of the islands were children born of the Gods. And in quite a literal sense, as well. You see, as Gods dwelt in the sky they gave birth to children that fell into the ocean, forming each of the Hawaiian Islands. And I am sure giving birth to these “children”  created some giant “cannonball” splashes!

Of course modern science does not quite agree with the story of islands falling out of the sky. According to geologists, the Hawaiian Islands were formed from a volcanic hotspot at the bottom of the ocean that connects to the Earth’s molten core. Over millions of years, a series of volcanic islands were created, forming the Hawaiian chain of Islands. When it was first created, Kauai was one gigantic volcano. But over the years the volcano collapsed, creating huge cracks that were gradually carved by wind and rain erosions. Thus creating magnificent features like the Na Pali Coast on the North and Waimea Canyon on the West. One of the highlights of our Kauai North Shore Driving Tour is a short hike at the Kalalau Trail along the Na Pali Coast, where you will be awarded with amazing views of this gorgeous volcanic mountain ridge.

Kauai is unique among all the Hawaiian Islands in that it’s the oldest of all Islands. Well, for human beings, being old is not always a pleasant thought, but for an island, it means more time for mother nature to do her work - evolving and developing an impressive diversity of animals, plants and insects. Much more so the other younger Hawaiian Islands like Oahu, Maui and Big Island. Many of these species found in Kauai are endemic, meaning that you can’t find them anywhere else in the world.

Let me give you a few examples. Some  time ago, a finch from the North American Continent must have gotten blown way off course and landed in Hawaii. After millions of years of evolution, there are now 45 different species of finches in Hawaii. But the Hawaiian finches are not like their cousins from the mainland, oh no, in fact, the Hawaiian finches have adapted to the local flora here. One of the most well-known species of Hawaiian finch is called I’iwi, also known as a honeycreeper. It is named so because of their long curved bill that they use to drink nectar from flowers. But in addition to that magical bill, the Hawaiian finch, I’iwi, has evolved to hover like the hummingbird , allowing it to drink from the flowers. Isn’t that something?

Now, I should tell you that after nature has worked so hard to create the unique beauty and biodiversity for Hawaii, humans can either preserve or destroy all of it. That’s right. We have the power to keep these islands special for generations to come. And it’s simple. Remember to pick up your own trash, and stay on the trail when you go hiking. Also, keep your distance from any life you see in the ocean or mountains. Let’s respect the land, or as we call it in Hawaiian, “Malama Aina.”

Want a chance to explore the oldest Hawaiian island?