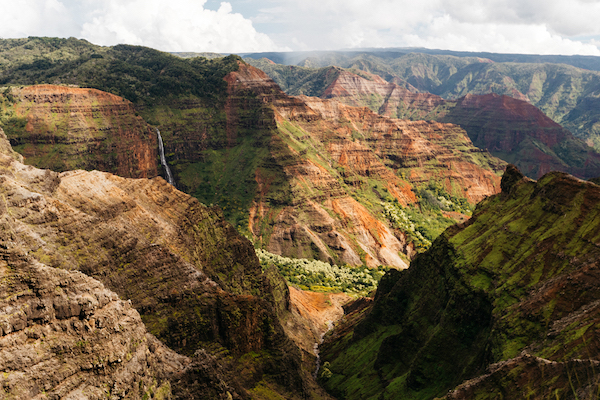 The Ancient Love Story of Hiku and Kawelu

Visiting Waimea Canyon to explore and learn? Let me tell you a Hawaiian legend that took place near Waimea Canyon - the love story of Hiku and Kawelu.

Hiku was born in the forests. One day, he went to the beach and met a beautiful woman named Kawelu. Hiku and Kawelu soon fell in love and got married. The couple was happy most of the time - but like all marriages, Hiku and Kawelu had arguments.

One day, they quarreled over something small. In anger, Hiku left his wife and returned to the mountains. Kawelu tried to follow Hiku, but he was too fast for her. Heartbroken, Kawelu returned home and hung herself.

When Hiku found out what had happened, he deeply regretted what he had done, and sought  desperately for a plan to bring his wife back to life. After counseling with a priest, Hiku decided he must go to the land of the dead - called Po - to rescue his wife.

Hiku found strong vines from which he braided a long rope. He then lowered himself into the bottom of Waimea Canyon, where the spirits of those who recently died would dwell.

Deep in this abyss of death, Hiku looked and looked until he found Kawelu. Hiku told Kawelu how much he loved her and needed her. With these gentle words, he persuaded Kawelu’s spirit to take hold of the rope.

When Kawelu’s spirit reentered her body and she opened her eyes, the lovers embraced. Hiku in tears promised that he would never leave her again.