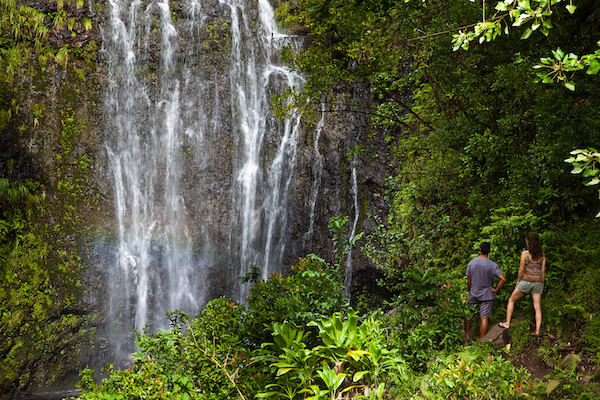 How Maui nearly combined all of the Hawaiian Islands

What do you think of Wailua falls? It’s really something else, isn’t it! I want to tell you an interesting Hawaii legend. Did you know that all the islands in Polynesia share a common ancestry and similar cultures? That includes Hawaii! If you’ve ever seen the Disney movie Moana, you will remember this character: Maui, who is a Demi-god, which means he’s half-man, half-god. Let me tell you a legend of how Maui learned how to create fire... and how he almost made Hawaii into one big island.

As the story goes, after Maui fished up the Hawaiian Islands from the bottom of the ocean with his magic hook, he was glad to see that the people lived happily on the islands. However, over time, the people found that it was quite difficult to travel from one island to another in their canoes. So they asked Maui to bring all the islands together and make it into one large land mass, instead of separate islands.

As legend says, the only way Maui could do this was to catch the powerful fish Luehu during full moon. So, he went fishing each month with his eight brothers to catch the great fish Luehu. But nine alae birds kept them from ever catching the fish. Alae is a native Hawaiian sea bird that looks a bit like ducks with black feathers. These Alae birds were friends with the Luehu fish, and every time Maui and his brother came fishing, they would count how many men were in the canoe. If they count 9, which is Maui & his 8 brothers, these birds would start a fire to warn the big fish so that it could escape every time. In those days, it was believed that the Hawaiian people did not know how to make fire. And the Alae birds were the only creatures in the islands that knew how to make fire. I know… you're probably wondering why birds knew how to start fires, right? Just stay with me here.

One day, Maui’s mother, Hina, came up with a brilliant plan. The plan was for Maui to make an image of himself with wood, kind of like a dummy of himself, and put it at the end of his canoe where he usually sat. Maui’s 8 brothers would go out to Wailua Bay to fish with the dummy. But the real Maui actually hid himself at the usual place where the Alae birds came to make fire.

Again the birds saw the men fishing and began counting how many were in the canoe, 1,2,3,4,5,6,7,8 and…nine! Bingo! So they again went to make fire at the usual spot. Suddenly, Maui jumped out from his hiding place and caught the alae bird leader! Maui then demanded the bird to tell him how to make fire. The little bird told Maui he could start fire by rubbing sticks together, but lied about what kind of wood to use. First the bird said ape, then taro stalks, and banana stumps, but none of them worked. Furious, Maui threatened the bird with death, at last the alae told Maui to use pua wood. This time it worked, and Maui was so excited to finally learn how to make fire! But he also wanted to teach those alae a lesson. So he rubbed the head of the bird with a burnt stick until blood came out. Ever since then, the alae birds have a red mark on their head. So this is how Maui, again, made a great contribution to the Hawaiian people.

Now, of course, with all the commotion, Luehu the big fish escaped once more.

But now, with no more warning fire, the next time Maui went fishing with his brothers, he finally caught Luehu on his magic hook. But before they set out, Hina - the mom - had told Maui to not disturb any bailing dish he might see floating at the mouth of the Wailua River. In ancient times, these dishes were used to bail out water in the canoes to keep them from sinking. Hina warned Maui so, because the dish would turn into a beautiful woman. However, just like most kids, Maui either wasn’t paying attention to his mom when she was talking, or forgot whatever she said right away... going in one ear and out the other. Well when Maui saw the dish floating in the river he thought nothing of it, picked it up and put it in the back of his canoe. And the brothers continued fishing. Suddenly, the big fish Luehu was hooked!  As Maui and his brothers pulled, the fish fought hard, eventually wrapping the fishing line around all the Hawaiian islands and drawing them ever closer. Excited, Maui urged his brothers to not to look back but keep paddling with all their might! As the islands got closer, crowds of people gathered on shore to cheer for Maui and his brothers. This pumped up the brothers more. But hey, something wasn’t right. As the brothers soon realized, the crowds weren’t really cheering for them, but for a beautiful woman in the back of the canoe. Well, what their mother Hina said had come true, the dish turned into a beautiful woman! All the brothers turned at once to look. With their attention diverted, the big fish became loose from the hook and the islands slid apart to where they had been.

Disappointed, Maui and his brothers returned empty-handed. Because his brothers looked back, the Gods turned them into eight boulders at the river’s mouth. We can still see these boulders today if you happen to drop by the area.

Well, I guess if there’s anything we can learn from this story, it will be…listen to your mom and pay attention when she’s talking. She’s always right!

Check out our Wailua Valley and Waterfalls Tour!