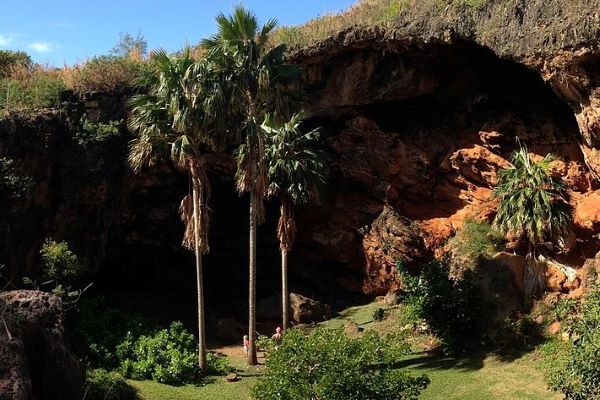 Exploring Poipu? Make some time to make your way to an awesome cave called the Makauwahi Cave. It’s also located along the Mahaulepu Heritage Trail, or the Coastal Trail at Shipwreck Beach.

This cave is actually a sinkhole that belongs to a large limestone cave. The largest in Hawaii, in fact. Geologists believe that the cave began its formation up to 400,000 years ago as a sand dune. But overtime, the heat from the sun actually turned it to stone. Eventually, groundwater eroded the limestone and dripped down from the cave’s ceiling, creating a fresh water pond inside the cave.

And then what? Well, the cave ceiling eventually collapsed, turning it into a giant sinkhole.

But it’s not just your average sinkhole. Makauwahi Cave is the richest fossil site in Hawaii, and maybe even in the entire pacific, helping scientists tell a story of the past 10,000 years here!

Fossils discovered here include indigenous birds, insects and plants that once inhabited the cave. In addition to fossils, ancient Hawaiian artifacts, such as pollen, seeds, fishing hooks and braided fishing line have also been excavated. But what’s most interesting is the thousands of bird and fish bones from species that nobody even knew existed until the cave was discovered in 1992.

Dna testing of the animal bones showed that these species were endemic to Kauai, meaning they were found nowhere else in the world. For example, the turtle-jawed moa-nalo was a flightless, large goose-like duck. Another, the Kauai mole duck got its name from its tiny eyes. And scientists think that it was a nocturnal duck that was near-blind. Instead of sight, it relied on its sense of touch and smell to survive. The Kauai palila was a species of Hawaiian finch that is thought to have had feathers that were red, gold, white and black. Unfortunately, most of the species discovered in Makauwahi Cave are now extinct, all except the blind cave spiders that still live within the cave.

The ecosystem in the cave and the surrounding areas is a fragile one. When you visit, do keep this in mind and do your part to help preserve it for future generations to come.