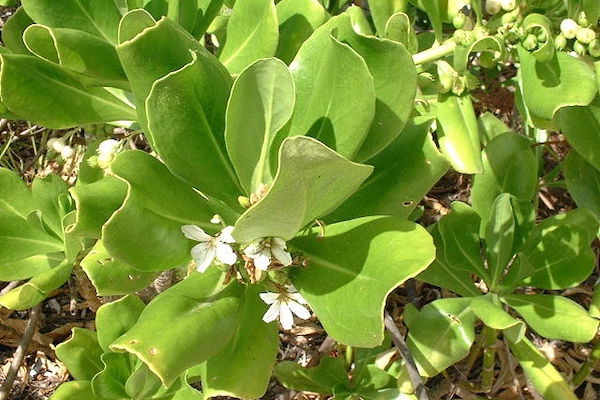 The Legend Behind the Naupaka Flowers: Lovers Forever Separated

There is a very unique flower in Hawaii called Naupaka Kahakai. It’s a bush that grows by the seashore with small white flowers. A unique thing about this plant, is that the flower only has half the petal, as if it’s missing the other half. Strange, huh? Well, on the high mountains in Hawaii, there is another plant with flowers that also have only half the petal. For those scientifically-minded, you are probably thinking this is just 2 different varieties of the same plant, one adapted to live by the seashore, the other in the mountain. That’s true. But how boring is that? Come on, let’s put some romance in the mix, and let Hawaiian legends tell us why there are two different flowers each with half the petal.

It’s said that many years ago, near Ke’e Beach on the north shore of Kauai, there was an ancient and prestigious hula school for boys and girls. The school rules were very strict, and didn’t allow any dating. Two students, a boy and a girl, Nau and Paka, fell in love. Falling in love was the most serious rule to break, so they tried to hide their love for each other. The night after their graduation from the hula school, Nau and Paka slipped away hoping to be alone. But to their horror, Kilioe, the school chiefess, caught them leaving and chased them.

The young lovers ran for their lives, because the punishment was death. Hoping to lose their pursuer, they decided to split up. But Kilioe was strong and caught up to Paka on Lumahai Beach where she killed her. Kilioe then chased Nau to the mountains, where she caught him and then killed him too.

This tragedy saddened Laka, the goddess of hula. She turned the body of Paka into the beach naupaka plant, and then Nau’s body into the mountain naupaka plant. Each of these plants, named after nau and paka, when in bloom only have half of a flower petal - a reminder that they are forever separated. However, it’s said that when one puts the flowers together forming the complete petals, the lovers can be reunited. Some story, huh?

This is just one of many legends about the naupaka flower. In similar tale, the boy and girl are named Nanau and Kapaka and each tried sacrificing themselves for the other. In another, Pele - the goddess of fire and volcanoes - becomes jealous of her sister and her sister's love Kaui, killing them both to create the two flowers.

No matter which version you believe, these two star-crossed lovers were willing to make the ultimate sacrifice for love.

Want to learn more about Hawaii's legends? Check out our Kauai GPS audio tours with hours stories and history!