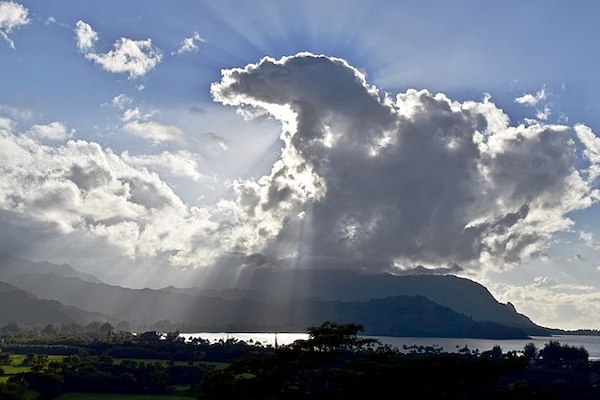 Sleeping Giant: The Mountain with a Legend Behind It

No trip to Kauai is complete without a visit to the famous Sleeping Giant Mountain. Local legend tells of a giant who feasted so much at a party in his honor that he laid down for a nap and never awoke, and when you see the mountain's resemblance to a sleeping giant from the nearby town of Kapa'a... you’ll understand why the legend persists.

Now you’ll have  to use a little creativity in order to see it, but let me help. First locate the most prominent bump in the mountain. That’s the giant’s head. To the right of it, the mountain slopes down. That’s the chin. Then it slopes down gradually further some distance to the right, that area is the chest. And the rest of the giant’s body is to the right and feet. Save this post so that you have it, and try to see The Sleeping Giant next time you’re in the area!

There are many versions  of how this giant came to be, but if you took our Shaka Guide Waimea and Na Pali Driving Tour,  you’ll recall that this sleeping Giant is named Puni, and was accidentally choked to death by his little Menehune friends.  But, like I said, the legend has many different variations.

Another explanation of how the mountain came to be goes like this: one day a fisherman in the nearby village caught a crying fish. Taking this fish to be  magical creature, the fisherman brought the fish back to the village and fed it poi to sooth it.

Well, it turned out that this crying fish had an insatiable appetite. He not only ate all the poi they gave him, but also all the other poi that the villagers scrambled to cook for him. As he ate, the fish’s body grew bigger and bigger, then he also grew arms and legs, and finally turned into a giant. Eventually, the villagers were able to sooth this crying giant into a looooong slumber. And till this day, he’s still sleeping.

Want to view the Sleeping Giant?

It's included on our Wailua Valley and Waterfalls Tour!