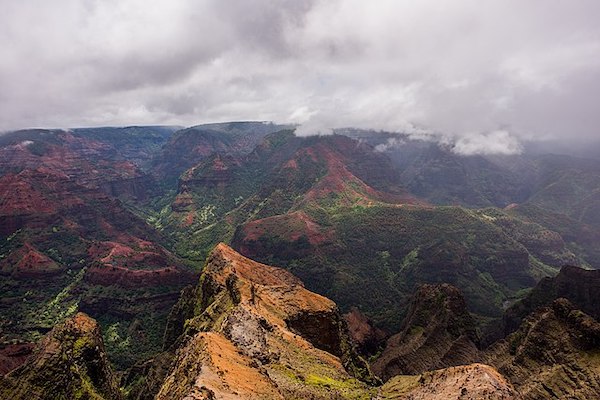 The Grand Canyon of the Pacific: A Massive Collapsed Volcano

We want to tell you a little about the interesting geology of Kauai. It will be helpful in understanding the scenery that you will see as you go around exploring the beautiful garden island, Kauai.

Around 5 million years ago, a hole in the bottom of the ocean started erupting molten lava straight from the earth’s core. Over time, an enormous volcano was formed in the middle of the pacific ocean.

The name of this volcano is Mt Wai’ale’ale, and it’s pretty much what forms the entire island of Kauai - it’s like one gigantic volcano.  At one point, however, Mt. Wai’ale’ale collapsed, forming a large canyon -  the very Waimea Canyon that we see today.

But the story didn’t end there, you see, even after the Waimea Canyon  was formed, the volcanic eruptions continued. The result is what you will see in  the canyon wall – distinct layers of dried lava that came from many different eruptions.

Another interesting thing you will notice about the canyon is that it looks… well, red. Yup! It’s our favorite color here on Kauai. So why exactly is the dirt here so red? Isn’t volcanic soil supposed to be dark?

Well, that’s true. But Kauai being an old island, (ok… no offense to you Kauai, but seriously, you are a few million years older than the other islands). Kauai, being an older island (trying to be polite), has had more time for the iron content in the soil to rust.

Yes that’s right, the red color in the dirt actually means the island is rusting before your eyes.. so, with its deep gorges, rugged ridges and that magical tinge of red, the Waimea canyon has been given a nickname "The Grand Canyon of the Pacific."

Want to see the beautiful Grand Canyon of the Pacific?

It's a stop on our Waimea and Na Pali Tour!