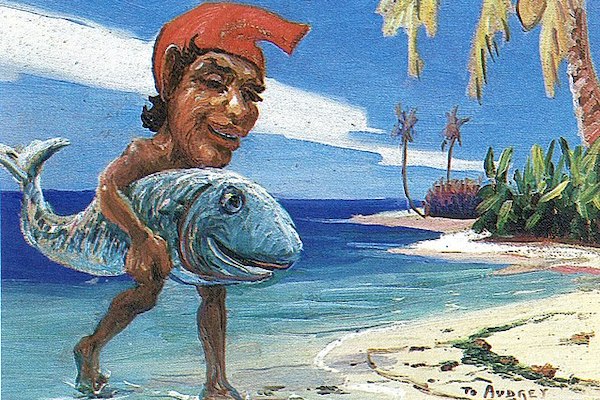 A painting of a menehune carrying a fish / D. Howard Hitchcock, Public domain, via Wikimedia Commons

A painting of a menehune carrying a fish / D. Howard Hitchcock, Public domain, via Wikimedia Commons

The Menehune - Leprechauns or Natives?

Throughout the island of Kauai, you’ll hear locals talk about a race of people in Hawaii called the  “Menehune.” So who exactly are the menehune?

Are they Hawaiians? Good question! The truth is, since Hawaiians only had oral history - and much of it has been lost, no one really knows who the menehune were and where they came from. But this much we do know. According to Hawaiian legends, the menehune were small people that stood only about 3 feet tall. They were mysterious, and they lived deep in the forest. Because they were shy and didn’t like to be seen by people, the menehune usually only came out at night. Despite their small size, the menehune were said to be very strong, and were ingenious craftsmen.

In ancient Hawaii, parents would often tell their children stories of the menehune to explain the unexplainable. You might want to think of them as the Hawaiian version of the Irish leprechaun, just without the rainbow and the pot of gold.

A story was told about a local Kauai youth named Laka. Laka’s father had gone away one day to visit a neighboring island... but  for some reason, he never came back. Laka was teased growing up because of this.

As he grew into a man, Laka developed a strong desire to go and search for his father.  Laka’s mother told him to go up into the mountains of Koke'e to find a koa tree, tall and straight, suitable for a canoe. Laka did just as he was told.

After much searching in the mountains, he finally found just the right tree. After cutting it down, Laka went home, planning to retrieve the fallen tree the next day. However, when he returned the next morning, the tree was back in its place as if it had never been cut down. Confused and amazed, he cut it down again - only to find the tree, once again restored to its stump the next day.

“Wow, what kind of magical tree is this?” Laka thought to himself. Laka again chopped the tree down. But this time, he also dug a hole next to the stump. Laka then hid himself in the hole, to see what would happen to the tree.

Time slowly went by, and as Laka sat in the hole hiding, he slowly drifted off to sleep. In the dead of night, Laka was awakened by a humming noise that echoed throughout the forest. as the noise grew louder and louder, Laka saw them - a band of menehune men led by a chief!

Although very surprised, Laka was able to come to his senses, and he came up with a plan. When the menehune got closer, Laka stretched his arm and quickly grabbed the chief by the beard. Holding the chief as a hostage, Laka threatened the menehunes to carve him a canoe or he would kill the chief. Reluctantly, the menehune agreed. But  only under a few conditions.

“Deal!” said Laka to the chief. The next day, Laka did just what he was asked by the menehune. He first he built a large hut for the canoe, then he prepared a large amount of food. As the night came, Laka lay awake waiting. Soon, he heard the humming noise emerging from the forest. The menehunes first feasted on the food, then off they went, to begin their work. They hummed all through the night. Although very tempted, Laka kept his word and didn’t even peek once.

At dawn the next day, the humming disappeared. When Laka opened his eyes, the menehune were gone....  and in the hut lay a beautifully crafted canoe of the finest workmanship.

Before you dismiss the story as a fairytale, let me tell you there has been evidence showing that a people called the menehune actually did live here on Kauai.

The Hawaiian culture as we know it today, is highly related to the Polynesian culture. In fact, archeologists think that today’s Hawaiians originally immigrated from Tahiti about 1000 years ago.

However - prior to the Tahitians, another race of people had already established an organized civilization on the islands. As these Tahitians, or those who later became Hawaiians, took over control of the islands, they gave those who had lived here before them a lower social rank. Thus, the word menehune was created, which means lowly people. Not for their height, but their social rank.

Interestingly,  when a census was conducted in the early 1800’s here  on Kauai, there were about 65 people of a remote village who reported their race as menehune. Perhaps it’s an indication that there did once live a unique group of people on Kauai, but overtime either they slowly died off, or intermarried with the Hawaiians.

So what do you think? Were the menehune magical leprechauns? Or real people with lower social rank? We’ll let you be the judge of that!