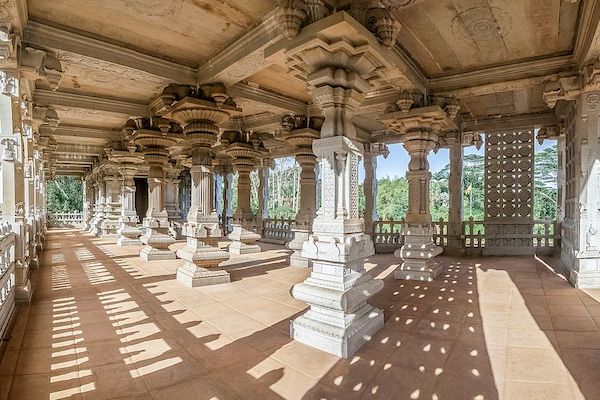 The Most Beautiful Place on Kauai: The Kauai Hindu Monastery

Let me give you a brief background on the Hindu religion. Hinduism originated in India-Nepal area, and is considered one of the oldest religions in the world. Currently, it’s the world’s 3rd largest religion after Christianity and Islam. Rather than having a very defined theological structure, Hinduism is more like a broad range of philosophies and way of life. There are many types of beliefs, forms and practices in the religion. Although you might not be a Hindu, you are probably familiar with its practices of meditation, yoga, and vegetarianism that focus on taking care of one’s mind, body and spirit.

Perhaps some of you are wondering why there is a Hindu Monastery here in Kauai. This place is really worth checking out. But let me give you a background of how the Monastery came to be. It’s founder was born Robert Hansen in Oakland California in the 1920s. When Robert was 20 years old, he traveled to India and learned at the feet of gurus and sages in Sri Lanka. He was initiated by Sage Yogaswami into the lineage and given a new name of Subramuniya, which means a self-restrained soul who remains silent or speaks out from intuition. Subramuniya also received a charge to “Go ‘round the world and roar like a lion…. build palaces (temples) and feed thousands”. And that’s what he did.

After returning to the U.S., Subramuniya established a Hindu Temple in San Francisco, the first ever in the U.S. In 1970, Subramuniya established the Kauai Hindu Monastery also known as Kauai Aadheenam, right here at the riverbank of the Wailua River. Today, the 363-acre Monastery is home to a few dozen monks, and is considered one of the holiest religious sites in the Hindu religion.

All monks at the monastery have sworn to celibacy, piety and poverty. But that doesn’t mean that they are antiques. In fact, these monks are quite modern. In addition to their assignments in managing the monastery in all its areas of responsibilities, such as finance, accounting, public relations, they also build and maintain their website and write blogs. They also publish an international magazine called “Hinduism Today”.

The Monastery is located at the end of the road. Follow the signs for monastery parking. It is open daily from 9 a.m. to noon for visitors. Admission is free, but donations are welcomed. Visitors are asked to wear modest clothing, but don’t worry if you are not. They will let you borrow sarongs at the entrance to cover up if you need to.

Some call the Monastery grounds the most beautiful place in Kauai. In the Kadavul Temple, you’ll find the largest crystal on earth, surrounded by 108 golden statues of Lord Siva and large statues carved from black granite.

Remember, be respectful. This is a practicing temple. Pay close attention to signs limiting access.

Want to visit the Kauai Momastery?