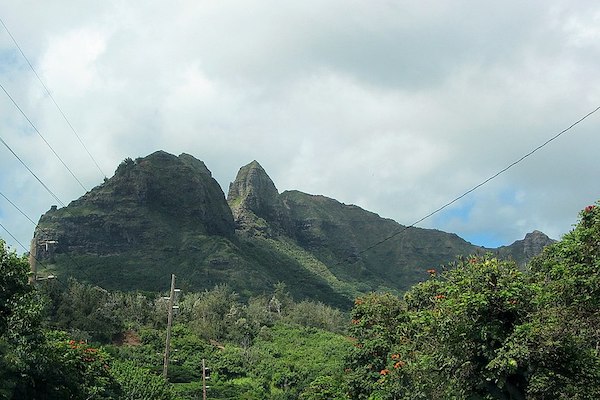 The mountain overlooking Anahola town has a hole in the ridge, and is called the Kalalea mountain range. Locals here simply call it “Hole-in-the-Mountain.” Yup, it’s that simple. But it is not just a name, this mountain actually does have a hole in it - some say it’s about the size of a helicopter. Someone actually flew one through it! But you can’t see this hole unless you climb up the mountain and get up close to it.

Hawaiians have many legends explaining why there’s a hole in the mountain. One legend says a supernatural bird pecked its way through the mountain to get to the nearby Anahola town, likely to create a shortcut for itself. Another legend records a powerful demigod hurling his magical spear through the mountain piercing its side.

But this hole-in-the-mountain actually became world-famous as the filming site of the original 1976 movie King Kong. After King Kong, another Hollywood blockbuster filmed at this mountain . Can you guess which one it was? It’s Indiana Jones and the Temple of Doom. This mountain was used as the backdrop during the opening credits.

Now, the mountain is sometimes nicknamed the “Kong Mountain” because from a certain angle the mountain looks like the profile of King Kong’s head.  There is this perfect spot to get a better look at this beautiful mountain range for yourself - and you tell me what you think it resembles!

Want to catch a glimpse of Kong mountain?