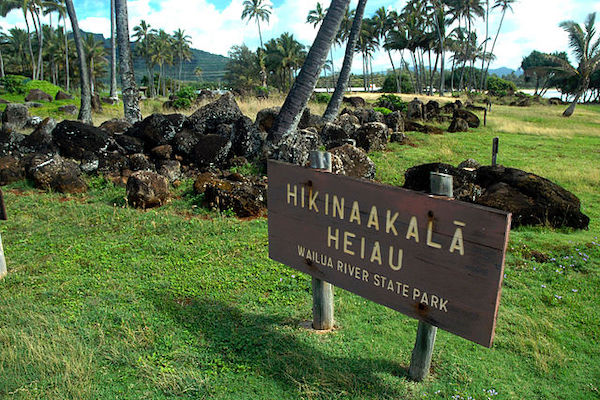 The Remnants of Sacred Temples that Enemies Destroyed

A vacation in Hawaii is never complete without taking in the time to learn about the islands’ amazing present and ancient history. A part of the great and ancient culture of Hawaii, and totally a must-see if you’re in Hawaii, are what’s known as “heiaus.” What are heiaus, you ask? They are ancient Hawaiian temples or sacred sites. If you’re in the Wailua Valley area and exploring Kauai, there are 2 heiaus here - the Hikinaakala (or better known as Rising Sun Heiau), as well as Hauola Heiau. Although these heiaus might look like nothing but piles of rocks now, they were once great structures. In Hawaiian history, when a chief conquers another, he would usually destroy the heiaus built by the conquered chief. After Christianity was introduced to Hawaii, many heiaus were destroyed, and others were forgotten over time. What we see today, are the base rocks of the great structures that once stood here.

The Hikinaakala, the Rising Sun Heiau created about 1200 years ago, was dedicated to the sun. Because we are located on the East side of the island, this is a great place to watch the sunrise! In ancient times, the dawn of the day was celebrated here with chants, drumming and prayers. It’s said that on special sunrises during equinoxes, the sun literally lights up the heiau. Its walls were believed to have been six feet high and up to eleven feet wide! That’s a LOT of heavy rock, hand-picked, carried and placed.

The other heiau, Hauola, was a Refuge and sanctuary. Here, the gates were always open to the fugitive who broke a kapu, or a law. He could rush in, and remain within its walls for a few days or more. Upon leaving, he would be immune to punishment and free to go. Kinda like a get of jail free card or something, you think?

When you explore the heiaus, you’ll find it difficult to tell the 2 heiaus apart. It’s ok. Everybody finds it hard to identify between the two too!

When you can, plan to visit and explore the area near the mouth of the Wailua River. When the tide is low, you might be able to see some ancient petroglyphs in the rocks. These are symbols carved into the stones long ago. Remember Maui’s 8 brothers who were turned into boulders? This is the place where the legend says they are located. However, for some reason, it can be challenging to locate all 8 of them today. Perhaps some of them were buried in the dirt or were given a second chance by the Gods. We may not know it... but what if you were destined to go and find them?

A few words of caution though. Heiaus are sacred places for Hawaiians. Please do not remove any rocks or disturb anything. Also make sure to obey all signs. If you see “Kapu”, it’s the Hawaiian word for keep out. Be a respectul tourist!

They're a part of our Wailua Valley and Waterfalls Tour!