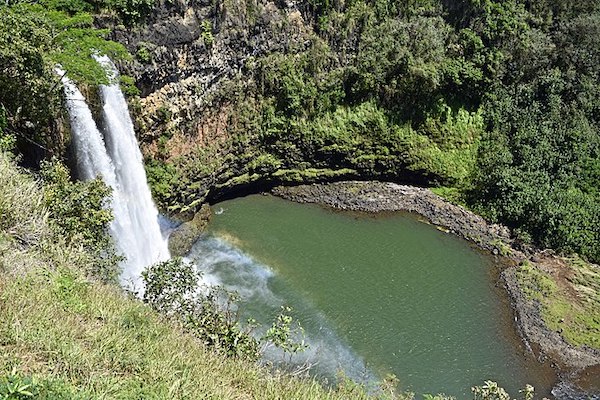 Wailua Valley: The Fertile Valley that was Once a Royal Abode

Mount Wai’ale’ale and Mount Kawaikini, are both the tallest peaks on Kauai, AND also the wettest spot on Earth. So, don’t get disappointed if you can’t see the mountain, since they are pretty much covered in clouds all year long. From those mountains, an abundant supply of fresh water flows year round down the river, creating many majestic waterfalls.

In ancient Hawaii, fresh water was very precious. The abundant supply of fresh water in Wailua Valley made this valley very fertile, and a highly desirable place to live. In those ancient days, only those in the royal family were allowed to set foot in this valley. It was Kapu, or taboo, for a commoner to enter this valley, unless he had been invited by a chief to do so. Of course, just as the rest of Kauai, during the 18- and 1900s, native trees in this valley were cut down for sugar and pineapple plantations. As you drive, you might have noticed the grasslands that line this road. These were the old plantation fields, now these grasslands are used for raising cattle.

The name Wailua in Hawaiian means “2 waters.” Some say that this represents the two forks of this great river, or the meeting of 2 waters - fresh water & salt water, at the river mouth. But some historians suggest that Wailua was named after the great chief Wailua nui aho’anu of the 14th century.

You see, the ancient people of Kauai really revered this valley as a sacred place. The Kings and chiefs of Kauai made Wailua Valley the capitol, and governed the island from this valley. The queens and chiefesses came here to labor and give birth on special rocks called the birthing stones.

Another reason why we know that this valley is sacred, is from the many heiaus that have been discovered in the valley. So, what is a heiau you might ask? A heiau is a sacred temple or place of worship in ancient Hawaii. Sometimes, it’s a place of refuge where criminals could go to avoid punishments. Hawaiians were superstitious, and both respected and feared a series of mythological gods. They constructed heiaus to worship different Gods to ask for safety, prosperity and even success in wars. As part of the Wailua Valley and Waterfalls Tour, we’ll be visiting 4 heiaus in this valley. First we’ll stop by the Hikinaakala, or the “Rising Sun” Heiau, and the Hauola Heiau at river mouth. And then the Holoholoku Heiau, which was a sacrificial heiau, then the Polihau Heiau near Opeakaa Falls. I hope visiting these 4 heiaus will help you get a peek into the spiritual beliefs of ancient Hawaiians, and come away with respect and love for this unique culture.

Want to visit the heiaus?