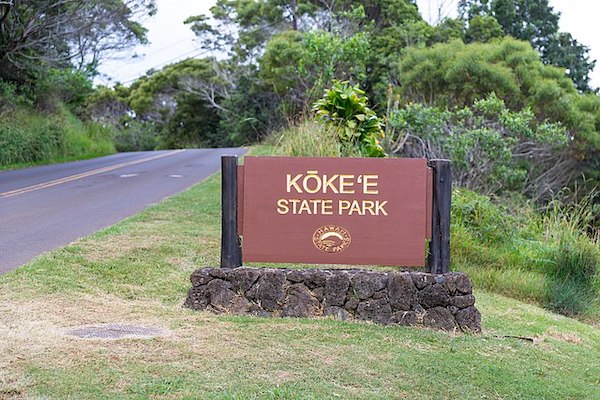 Why Don't Trees Grow in Koke'e? Well, it Includes a Bigfoot

In Koke'e State Park, elevation can push to up to 4,000 feet - or 1.2 km. As you get higher and into the wetter portion of the mountain, you will notice the vegetation around change into a dense forest.

Only minutes from the end of the road, I suggest you stop by Koke’e Lodge and Koke’e Museum. This is a great spot to stop by to get food or use the restrooms. The lodge and museum at Koke’e are located at a small plateau in the mountain. Here you will see a large grass clearing right outside of the Koke’e lodge and museum.

Although you might think that the grass was planted for the visual appeal, that’s  not  really the case. In fact, there is an interesting Hawaiian legend explaining why trees don’t grow here in Koke’e.

As the story goes, once there was a robber named Kana-loa-huluhulu, which translates into “a tall hairy man.” just think of him kinda like the Hawaiian bigfoot - in fact, let’s call him “the bigfoot.”

It was said that the bigfoot would hide himself in the woods of Koke’e, and pounce on unsuspecting travelers to rob them. This went on for many years, until the ruling chief got word and decided to take care of it.

As the sheriff had suspected, the bigfoot was no ordinary man. He was actually a powerful demigod - or half-man half-god!

That evening, the bigfoot came back to life - but he couldn’t find his head! So the headless body tore up all the trees by their roots  trying to find his missing head. So, there we have one explanation of why there are no trees growing in Koke’e. But wait… why haven’t the trees grown back by now? Well, some say the bigfoot still lives and comes out at night here, still looking for his head….wow, that’s creepy - lets just hope he doesn’t take yours!