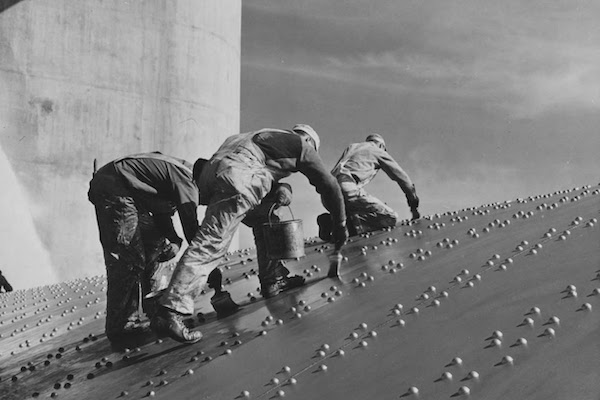 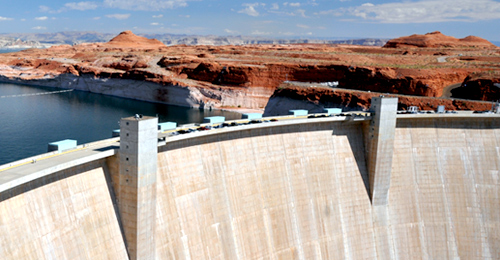 Hoover Dam History: Why Was the Hoover Dam Built? 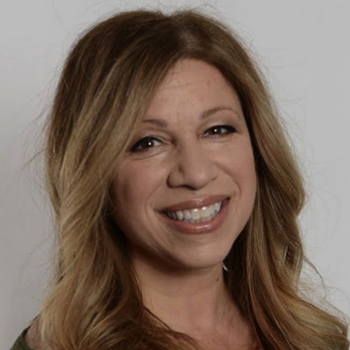 One of the main goals in creating Hoover Dam and Lake Mead was to control the Colorado River and keep it from the destructive flooding that was a constant threat to Arizona and California, while simultaneously harnessing, or ‘taming’ the river’s power. Or, in President Herbert Hoover’s vision, to take something catastrophic and turn it into something good.

Hoover Dam was built between 1931 and 1936, during the Great Depression. Because the dam site was in the middle of nowhere at the time, a settlement had to be developed to house all of the construction companies, their workers, and the workers’ families. Basically, a town was created – Boulder City, Nevada. A total of 21,000 men worked on the dam and lived in Boulder City during those years with their families (and some never left.)

Much of the labor that went into building this monumental dam was manual, from moving debris to drilling holes for explosives, and from creating a level foundation to fitting giant concrete blocks into place. It was demanding, difficult, dangerous work. The official number of lives lost during the building of the dam was 96, although some argue that the number was actually higher since some died later on from injuries and exposures suffered at the dam site. 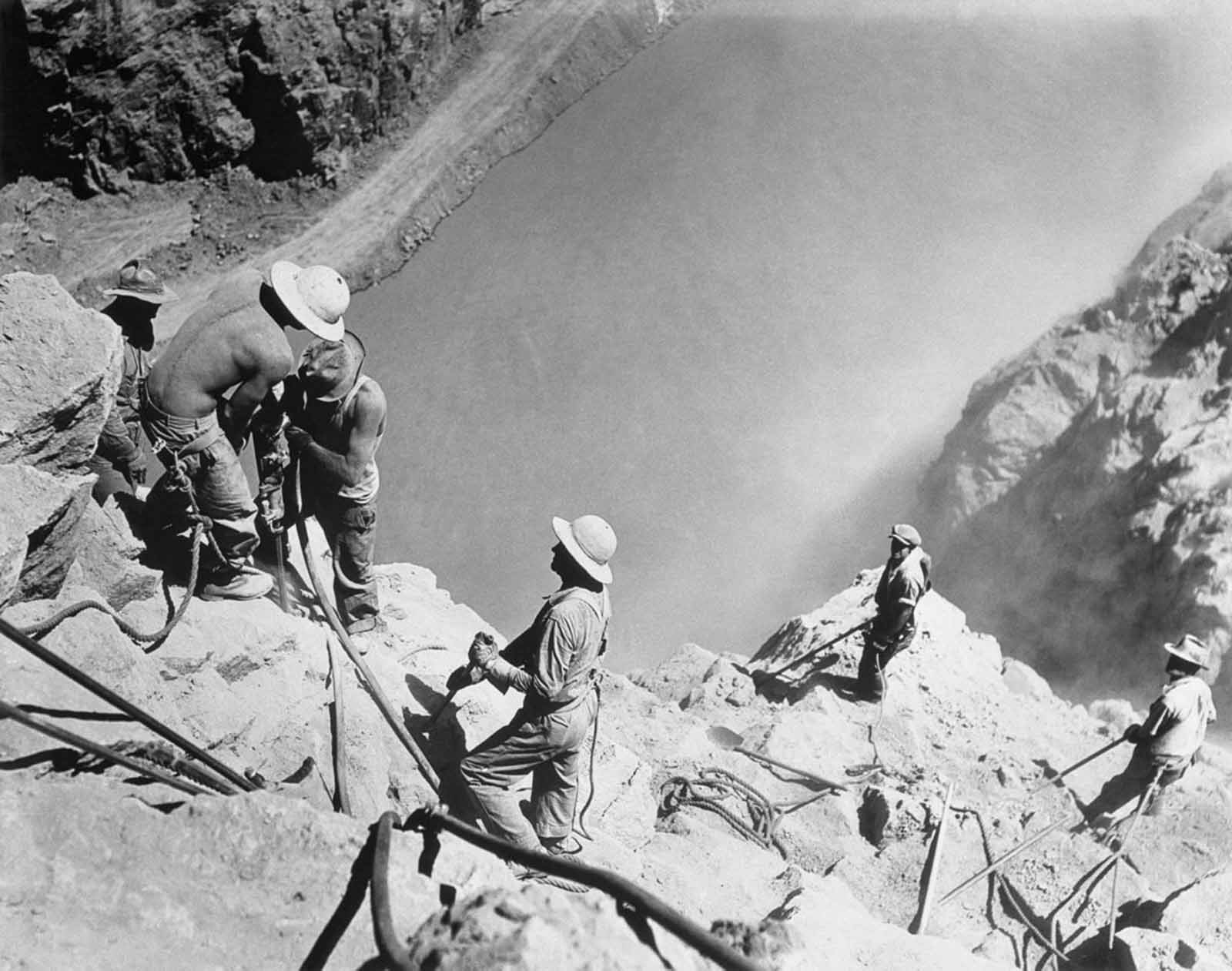 In order to construct the dam, the Colorado River literally had to be ‘moved’ by blocking it off and forcing it into diversion tunnels, so that work could be done inside Black Canyon. And many workers had to precariously dangle at a height of over 700 feet above the Colorado River in order to blast away loose rock.

Meanwhile, with all of the supplies needed to build Hoover Dam, including a tremendous amount of concrete, a consortium of construction contracts went out to six major firms, collectively named “Six Companies.” Together, they built almost 30-miles of railroad connecting Boulder City with all of the facilities needed to get supplies like cement, gravel, etc. to the dam site. Some of that route ran through what is now Lake Mead National Recreation Area. Today, the Historic Railroad Trail is a fantastic day-hike for you (and it’s dog-friendly!) The trailhead begins from the Lake Mead Visitor Center and runs all the way to Hoover Dam, taking you through those historic tunnels!

At the time that it was built, Hoover Dam was the world’s tallest dam, standing at 726.4 feet high. And, once complete, what a success story it was. In addition to being considered a feat of engineering, it accomplished its many goals. Among them, with the West becoming more and more populated, demand was on the rise for the steady availability of water.

RELATED: The Nazi Plot to Bomb the Hoover Dam

Lake Mead, the reservoir formed by Hoover Dam, became the largest in the U.S. in terms of the amount of water it could hold. Providing water to Nevada, Arizona, California and parts of Mexico, and serving about 20 million people, it was capable of irrigating two million acres for farming.

The cost of building Hoover Dam was offset by generating and supplying hydroelectric power (with 17 turbines, it could provide power to 1.3 million homes). All of these benefits from the dam led to the growth of areas like Las Vegas, Los Angeles and Phoenix. 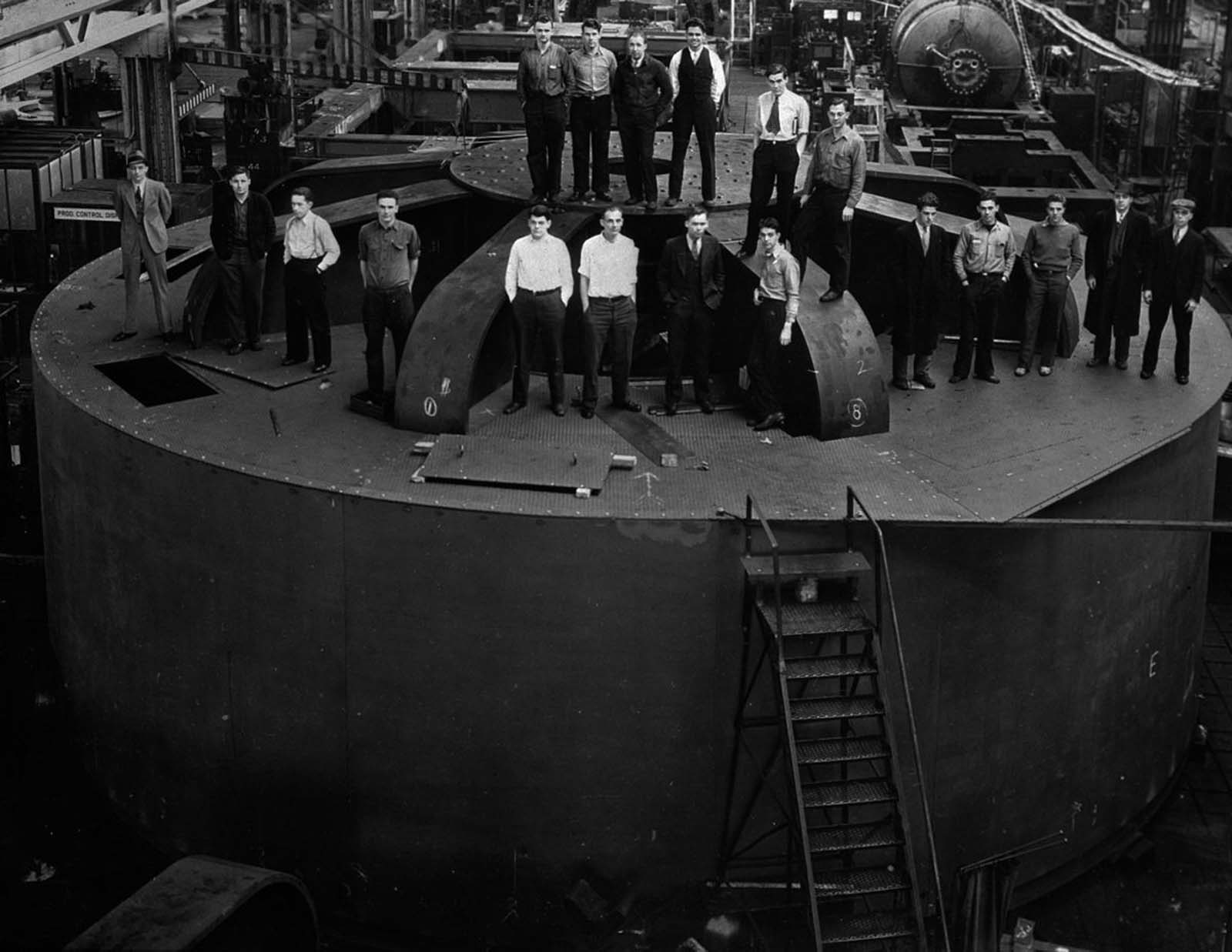 Hoover Dam (run by the Bureau of Recreation) also became a major sightseeing destination with over seven million visitors a year – with almost one million of those tourists paying for guided tours of the dam. Meanwhile, Lake Mead (and the creation of the very first National Recreation Area surrounding it) became a major destination for outdoor activities including water sports, biking, hiking, fishing and camping, as well as scenic driving (run by the National Park System).

The Future of Hoover Dam and Lake Mead

Unfortunately, due to a combination of climate change, years of drought conditions and expanding populations (and therefore a greater demand for water) in the area that Hoover Dam serves, Lake Mead has dropped below key thresholds in the past few years. As environmentalists continue to search for ways to refill the lake, our nation’s largest reservoir continues to drop in water level.

If Lake Mead water levels can’t be increased, the southwest will face unprecedented water cuts (starting with agriculture, then extending to municipalities) that will further reduce the amount of Colorado River water that can be used in cities.

Unfortunately, Hoover Dam, and the Glen Canyon Dam/Lake Powell (‘above’ Hoover Dam in Arizona) have been using more water than the Colorado river can provide. Effective changes must be made, or the Colorado River could eventually start to dry up and cease to flow past Hoover Dam.

If you’re planning a visit, you can learn lots of geological, scientific and historical facts, along with some good stories, by downloading the Shaka Guide Hoover Dam & Lake Mead Tour.