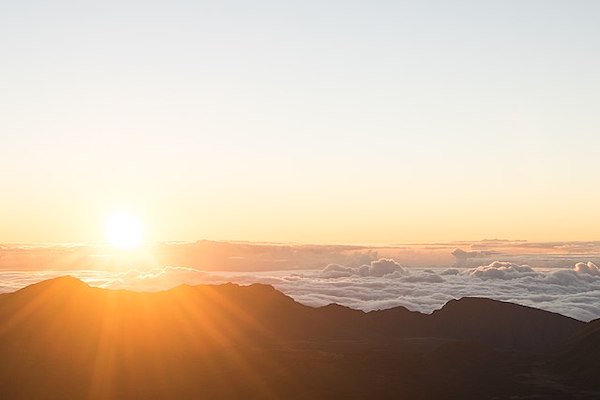 According to Hawaiian legend, the mighty god Maui not only fished up the Hawaiian islands with his magic hook, but he also captured the sun! Let us tell you the story.

Legend has it that one day, as Maui was preparing to go fishing, he noticed his mother, Hina, was very sad - unlike her normal cheerful self. Curious and concerned, Maui asked his mother why she was sad.  Hina explained that her clothes would not dry, because the days were too short. Hina also told Maui that the people were complaining that their crops were not growing fast enough. Maui declared that he would force the sun to travel more slowly across the sky. Hina warned Maui to be careful not to anger the sun, because the ruler of the day is a powerful god! But did Maui listen?

No! Devising a clever plan, Maui cut down numerous coconut trees and braided strong ropes out of the fiber. Then, in the dark of night,  he traveled to the top of Haleakala, where the sun made his home.

There Maui sat upon the crater rim... and waited. When the first light of morning emerged over the crater, Maui stood  up and held in hand the strong rope he had made. Before the sun could notice him, Maui lassoed and trapped the sun’s first leg with his rope. The sun was powerful and angry, and pulled hard to snap the rope - but the rope held strong. Maui then trapped the sun’s second leg, then the third  - and before long, all sixteen legs of the sun were tied up by Maui’s rope. Unable to move, the sun asked Maui why he had done this, and what it was that he wanted. Maui told of his mother’s sadness, and then threatened to cut off all the sun’s legs unless he promised to move more slowly across the sky. The sun made a heavenly promise to Maui, and was then set free.

So, now you know the legend of how Maui captured the sun and forced him to travel more slowly across the sky. Because of Maui’s great feats - fishing up the hawaiian islands, and making the days longer - he is often called the Hawaiian suppa man!