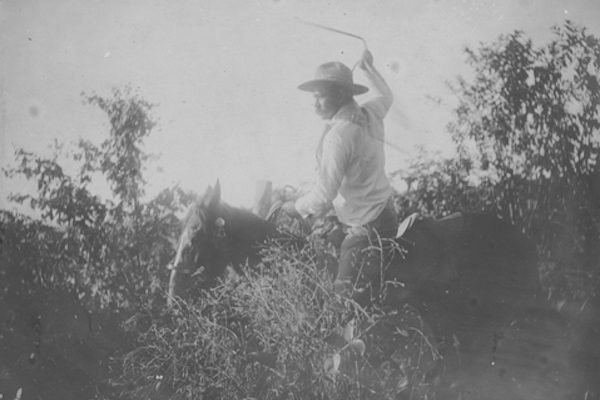 Cattle in Hawaii: How Hawaiian Cowboys, or Paniolos, Came to Be

Before westerners arrived, there were no cattle, sheep or horses in Hawaii. Late in the 18th century, a British sailor brought the first 5 black longhorn cows to the islands, and gave them to king Kamehameha the Great as a gift.

Having suffered a long sea voyage, these poor cows were barely alive when they arrived. Eventually, though, they bounced back and thrived in the lush green pastures. The king ordered that no one should hunt or kill these cattle - and as a result, thousands of wild cattle soon roamed the islands, and eventually became pests.

It became apparent that something had to be done with these wild cattle. But no one in Hawaii at that time knew how to handle or herd cattle. So what could they do? Well, luckily, someone came up with a solution of bringing in a few Mexican cowboys to help train Hawaiians about cattle and horses.

These Mexican cowboys soon proved to be invaluable. Not only did they teach Hawaiians how to ride horses and wrangle cattle, they also helped establish a flourishing cattle industry in Hawaii. The leather hides and meat were traded with sailors stopping over in Hawaii, and even exported to countries as far away as Chile.

Well, the Mexican cowboys were a big help to the Hawaiians, but as you can imagine, they did have a little language gap. You see, in the Hawaiian language, there is no “s” sound. As a result, Hawaiians couldn’t pronounce the word “Español” correctly. But they mimicked, improvised and created a word in Hawaiian that did the job… and  “Paniolo”  became the Hawaiian word for cowboys. Still to this day, Hawaiian Paniolo continue to work the land, just like they have for generations.

Want to see the lands that Hawaiian Paniolo still use?