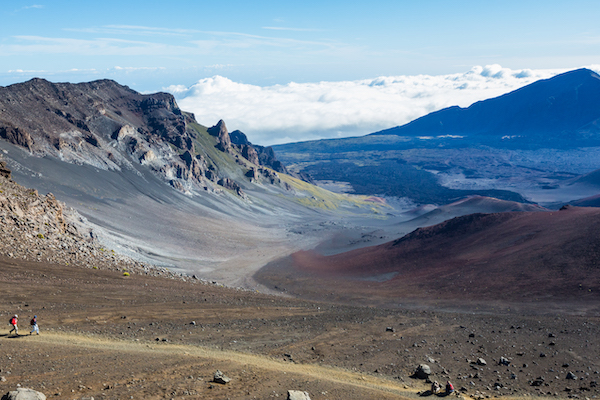 Hawaiian Creation Legend: Pele's Role in the Creation of Maui and Haleakala

You know that most everything in Hawaii has a legend associated with it. So some of you might be askin’ yourselves… “are there any Hawaiian legends about the Haleakala volcano?" The answer, of course, is most definitely!

Let us start out by telling the story of how the island of Maui came to be. According to one  legend, Pele, the goddess of fire and volcanoes, lived together with her older sister Namaka, the goddess of the ocean. One day, Namaka became very angry with Pele because she had seduced her husband. Namaka chased Pele out of their home in the island of Kauai, the oldest of all the Hawaiian  islands. Homeless, and with nowhere to go, Pele, the goddess of fire and volcanoes, plunged her digging stick into the earth to build a new home, made out of volcanoes. She started on the islands of Kauai, and then on to Oahu. But with each attempt, Namaka, with the power of the ocean, would flood the pits - destroying Pele’s new home. Pele next landed on Maui, where she dug an even larger and deeper pit to create a large volcano, in hopes to keep her sister out. But again, the goddess of the ocean, out of her wrath, flooded Pele’s newly dug pit. After the water receded, what remained of the pit was the massive crater we know as  Haleakala. So, why not take the opportunity on this majestic mountain to enjoy Pele’s handiwork?