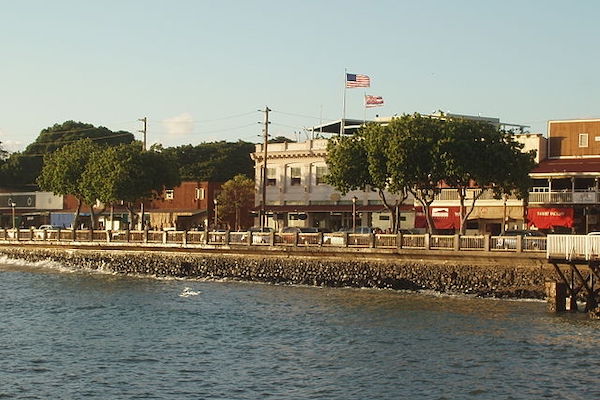 In Hawaiian “lahaina” means “merciless sun” - and if you’re taking a vacation in Maui and driving around, you will soon find out why! The sun shines very hot here, especially in the summertime.

Even before the first foreigners began arriving, Lahaina was the residence of the high chiefs of Maui, boasting it as the “royal capital of the Hawaiian kingdom.”

Despite the royal residents, for centuries, Lahaina was just a sleepy fishing village. But all that changed when the town became a center for the whaling industry.  Whaling ships started to arrive in the 1820s by the droves. Could you imagine a hundred tall-masted whaling ships anchored offshore? Well, that’s how it was back in those days.

Whaling is the practice of hunting whales for their blubber, skin, teeth, and bones. The blubber was cooked down in huge pots to make oil used for heating and lamps. The bones were used for things like umbrellas and buggy whips.

With the ships came economic opportunity for the town - but also a lot of trouble. Fierce struggles ensued between the sailors and the Christian missionaries, who tried to control their excessive drinking and carousing.  After the death of the very devout Christian governor Hoapili in the 1840s, there followed twenty years of lawlessness in what had become a rip-roaring ‘anything goes’ frontier town.

Nowadays, the only whaling ships here in Lahaina take people out to see these amazing creatures up close! At a relatively shallow 600-feet deep, the waters between Lahaina and the island of Lanai are considered a sanctuary for whales, where they come to mate and give birth. Here, during the winter months, you will find plenty of whale watching tours that you may want to check out if you have the time. You also can enjoy the beautiful views of the island of Lanai and Molokai off in the distance.

Lahaina’s history makes it a popular destination for visitors. Even though the population is little more than 10,000 people, up to 40,000 people can pass through the town daily during the high tourist season. This means a lot of crowds and limited parking facilities.

As you enter the sleepy town of Lahaina, you’ll be greeted by “banyan tree square,” where a huge banyan tree towers over the entire park, which covers almost an acre of land. It was planted in 1873 to commemorate the 50th anniversary of the arrival of the missionaries to the island. This banyan tree is the largest of its kind in the entire United States.