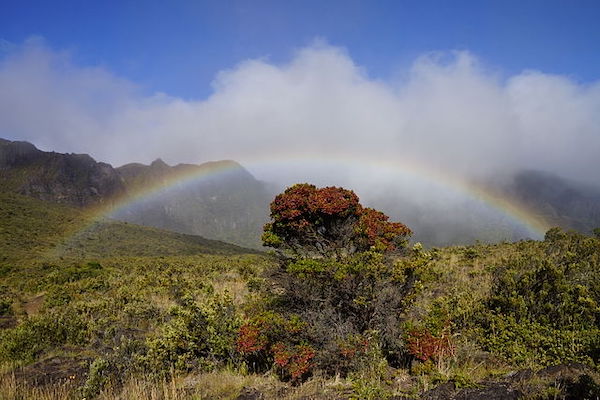 How Ancient Hawaiians Used Haleakala - and How it's Used Today

In the Hawaiian culture, Haleakala is a sacred mountain. It is to be reverenced and respected. Numerous heiau, or temples, burial sites and petroglyphs have been discovered in the park.

Hawaiians came to Haleakala to perform many rituals. One of them is to predict the future of a newborn child. After a baby was born, the parents would wrap the umbilical cord in grass-woven cloth and hide it in a rock crevice or toss it into the bottomless pit found in the crater. Some say doing so would make the child strong, others say if the cord was destroyed or eaten by rats then the child was destined to grow up a thief. Regardless of the reason, this ancient ritual was practiced for generations, making Haleakala a place of great mana, or spiritual power, where Hawaiians can connect with their ancestors.

Hawaiians would also come to Haleakala for the abundant resources here. An iron-rich stone called adze was quarried out of the crater to make tools and weapons. The mountain also  supplied an abundance of native plants for food and medicine.

Well…but that’s not all that ancient Hawaiians did on Haleakala. Haleakala was a place where Hawaiians came to study the stars. According to Hawaiian historians, hundreds of planets and stars were known and were given Hawaiian names. Such as na koa, meaning “the darts” for today’s belt and sword of Orion. The big dipper was called na hiku, meaning “the seven” for the seven stars that form the constellation. The north star was called hiku-pa’a, meaning the fixed star.

With such a wealth of knowledge about the stars, ancient Hawaiians were excellent ocean navigators capable of navigating long ocean voyages using only the stars as their guide. In the past few decades there has been a revival of hawaiian culture, especially the ancient practice of star navigation.  you may have heard, in 2013  a double-hulled traditional sailing canoe called the Hokulea undertook a journey to circumnavigate the earth using only the stars to navigate. The journey is over 50,000 nautical miles, and in the end will take more than 4 years to complete. No wonder the Hokulea’s journey is dubbed  the astronomical legacy of the Hawaiian people.

But the Hokulea canoe is not the end of Hawaii’s astronomical legacy. In fact, this legacy continues to live on today through a handful of cut observatories as we get closer to the top. at 10,000 feet above sea level, these white dome-shaped observatories sit above 1/3 of the earth’s atmosphere, where the air is clear and dry. Such ideal conditions make Haleakala one of the world’s top locations for astronomers to peer deep into the universe.

Since we get a good view of these observatories at the summit, let us tell you briefly what each of them do. One of the observatories monitors the earth’s resources - such as climate, plate tectonics, and ocean levels. It also helps improve the network of satellites that supports your smartphone’s GPS. So let’s observe a little observatory gratitude… for making all this possible!

Another observatory tracks asteroids, meteorites and other space junk that are larger than 120 feet or 30 meters wide. At this size, they are too big to burn up in the atmosphere when they enter the earth, and can potentially pose a threat to people. Certainly, we humans don’t want to be wiped out like the dinosaurs by a giant meteorite! Hey, you never know... it could happen!

The newest observatory at Haleakala is the advanced technology solar telescope. Unlike other stargazing telescopes that come out at night, this telescope comes out during the day to observe the sun - the hot mama of our solar system. Because, with very few exceptions, life here on earth cannot survive without her, it’s important that scientists continue to understand, study, and even predict potential dangerous activities from the sun.

Due to access being restricted around the observatories, the best view you are going to get of them is from the summit overlook on red hill. When you see the Haleakala crater from the summit, you’ll get a sense of its vastness. In fact, the crater is so large and deep that you can fit the entire island of Manhattan inside it! Rising up from the red and black sands of the crater floor, there are nine cinder cones - the tallest one is around 1000 feet (or 300 meters) high. Do you know what a cinder cone is? A cinder cone is where lava is spewed out during an eruption! They truly are the monuments of Haleakala’s fiery past.

One thing you  will notice immediately, are the many different hues and shades of color in the crater. “How did the haleakala crater get so colorful?” you might ask. Well, the yellow  comes from sulphur deposits. The black is from cooled lava. The various shades of red are from the oxidation of iron, which means that the mountain is literally rusting before your eyes - isn’t that something! To some, the Haleakala crater is a desolate type of beauty; to others it’s a rare glimpse of heaven on earth. Now, there are a few  things you should know about Haleakala. The summit is more than 10,000 ft or 3,000 meters high. So it gets cold - and sometimes, really really cold. During winter, it might even snow… and the temperature can fall well below freezing. Even during the hottest times of the day, it can reach around 65 F or 18 C.  So we sure hope you bring some warm clothing with you when you visit!