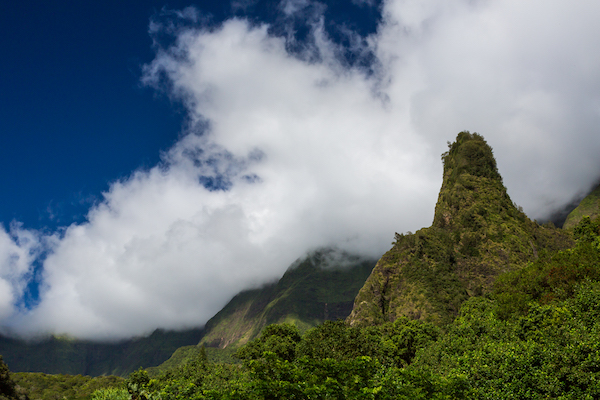 Iao valley state park is in the central highlands of western Maui, about 4 miles west of Wailuku.  The valley lies 750 miles above sea level and stretches for 10 miles, comprising about 4000 acres. Clouds rising from the valley shroud the top of a 2250-foot rock pinnacle known as the Iao needle.

How did the Iao needle get its name? Well, y’see, one day this guy went and sat on it and just yelled “iiiiiaowwwww!”

All joking aside, according to Hawaiian legend “Iao” was the name of the beautiful daughter of the god Maui. Puuokamoa, a half fish, half man-god, was the only one who dared approach her. Iao fell in love with Puuokamoa, and Maui, when he found out, was so angry he ordered the capture of Puuokamoa with the intention of burning him to death. Puuokamoa’s friend Pele, the goddess of fire, talked Maui into turning him into a pillar of stone instead. So now the Iao needle stands as a monument to love.

“Iao” is the hawaiian word for “supreme cloud.” The top of the Iao needle is often hidden behind clouds. Early morning is the best time to view  it. The needle is actually the end of a long winding ridge, which was formed as streams and waterfalls eroded away the softer rock surrounding it. The Iao valley, which is surrounded by the walls of Pu’u Kukui crater, is what remains of the central crater of Mauna Kahalawai - the west Maui volcano.

The Iao needle is one of the most sacred places on the entire island of Maui. Ancient Hawaiians honored it as the phallic stone of Kanaloa, god of the ocean. It was once even used in ceremonies as a natural altar. If you leave the paved path and explore some of the trails surrounding the needle, you may happen to find a large rock with offerings wrapped in ti leaves piled in front of it. The leaves of the ti plant are traditionally used by the Hawaiians to wrap offerings left at sacred places. More than one visitor to the area has mentioned feeling  a powerful rush of energy streaming down from the Iao needle.

In 1790, a historic battle was fought here. Kamehameha, the chief from the big island, decided to invade Maui. While Maui’s chief Kahekili was on Oahu, Kamehameha and his forces proceeded to wipe out the Maui troops with the aid of a cannon nicknamed Lopaka. They rolled Lopaka over the rocky trails into the Iao valley, and backed Kahekili’s Pahupū warriors into the back wall of the valley.

There, Kamehameha’s men killed nearly all of them, as Lopaka blasted away, loaded with shells and rocks. From the high cliffs above, Maui’s women and children watched their loved ones die.  The stream was so clogged with all of the bodies, that the water ran red with their blood.

There are two places to visit within Iao valley. The first area, just past the bridge, is Kepaniwai park. It’s free to park here, and there is a large picnic area near the stream, along with a couple of cultural gardens. There is also a good place to jump in the stream when the waters are calm.

The main area to visit while in Iao valley is at the end of the road. Here you can find an amazing picturesque view of Iao needle, plus a botanical garden, as well as a few hiking paths. Remember to follow the signs when hiking, and be wary of flash flooding - as many of the trails take you near the stream. Be wary of swimming in the upper portions of the stream. There are some places where the water pools and it is calm enough to take a dip, so exercise good judgment if you decide to jump in and cool off. There is a nominal per car parking fee and the park closes at the end of the day. Also note, the gates here close at 5:30pm.

Want to visit the Iao Valley?