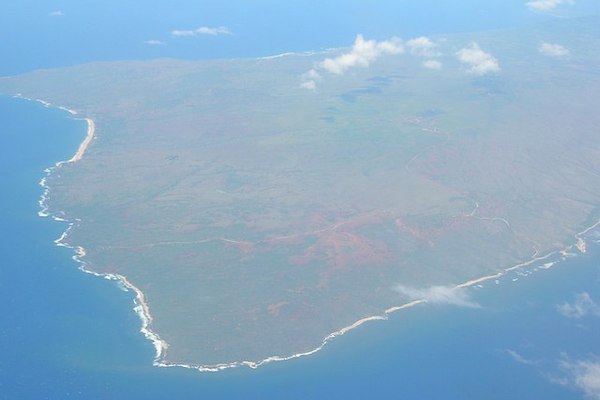 While driving along the west side of Maui, you may be able to see the islands on the horizon. These are the islands of Lanai and Molokai.

Lanai was once one of the largest pineapple plantations on the entire planet, and it’s still nicknamed “the pineapple isle.” It used to be owned by the Dole Food Company, who plowed the island’s interior into fields, and built the harbor, roads, and plantation cottages to house the workers. By 1930, most of Lanai’s residents were Dole employees and they exported 65,000 tons of pineapples a year.

By the 1980’s, the pineapple industry was in decline. Dole transformed into Castle and Cooke and developed Lanai into a pricey tourist destination. In 1994, Bill and Melinda Gates got married on the Manele Golf Course, with sweeping views of the Pacific Ocean. In order to keep their wedding private, they booked all the rooms at the hotel and hired out all of the helicopters on Maui so nobody could do a flyover.

Now Lanai has a new owner, Larry Ellison, the founder of the technology company Oracle who bought the majority of Lanai for $300 million. Gee, imagine owning an island… now that would be something!

Next to Lanai is Molokai, the friendly isle. With about 7,000 people, Molokai has much more of a country vibe than Lanai. The Molokai Ranch takes up most of its interior, creating a strong Hawaiian cowboy, or paniolo, culture on the island. On the backside of the island is Kalaupapa, an isolated area surrounded by towering ocean cliffs. It was once a leprosy, or Hansen’s Disease, colony where the sick were exiled in the 19th century. Today it's part of the National Park Service, and can be toured  with a mule ride down the steep cliffs.