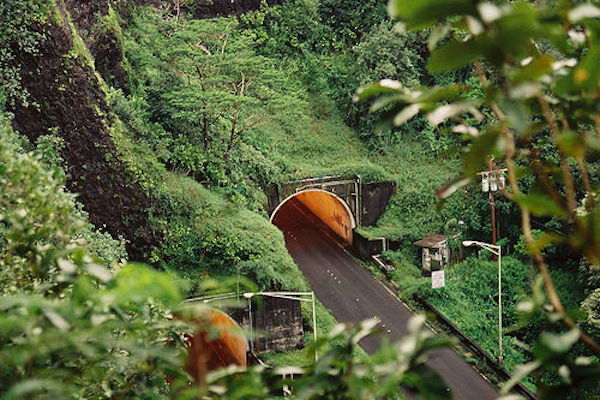 The Pali Tunnel: The 5-Mile Tunnel Through Maui

Have you seen the tunnel that connects the west side of Maui to the rest of the island? This is the only tunnel on the entire island, and it ‘s one of the few places you can honk your horn without people giving you stink-eye.

On Maui, it’s customary  to honk as you pass through the tunnel. No one is really sure how the tradition got started, but people still do it to this day. Maybe it has to do with the unique echo effect. So, anyway, honk if you love Maui, I guess!

Before the tunnel was built, the old road followed the cliff face and was so curvy it was often called “the amalfi drive of Maui,” referring to the winding cliff-side road in Italy that the Romans built. If you look above the current road, or into the valleys, you can still see the remnants of the old road.

In 1950, workers began blasting and grading a new, less dangerous, highway over the pali, creating the tunnel. The work was called “operation puka-in-the-pali”  which means “operation hole-in-the-cliff,” as workers blasted through 315 feet of tough volcanic rock. When they finished, the tunnel - and over 5 miles of honoapi’ilani highway - were ready for public use. The tunnel opened in 1951, and was the first tunnel on a public highway in Hawaii. The road follows the same path today.

Want to drive through the tunnel?