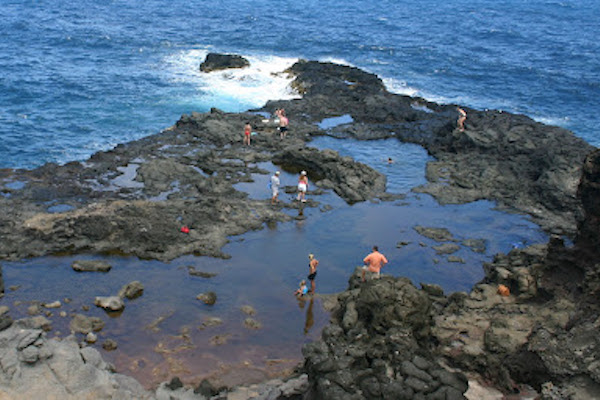 The Olivine pools are large tidepools right by the ocean’s edge. A while back, there was a guidebook about Maui that became popular, and which named these the Olivine pools - and the name stuck.

So, what is Olivine? Sometimes called Pele’s tears, it’s a green mineral found near volcanic eruptions. It’s also been found in asteroids, meteorites, the moon, and the planet mars. The Olivine pools tend to have a greenish turquoise tint when the light is just right - and many think it’s because of deposits of the mineral Olivine here.

First off, the pools are beautiful. You can swim and snorkel in them during certain times of the year, and the waves even bring small fish into the tidepools. So, it’s really a cool experience. But we also have to tell you that the pools can be dangerous - even deadly. Many people have died here. There’s even a memorial plaque to commemorate those who lost their lives. But that doesn’t take into account the many more who have been injured! Why, you ask? Well, these tidepools are completely exposed to the open ocean - and the ocean in this area can be intense, sometimes with enormous waves! Even though you might just be relaxing in the tidepool, occasional huge waves will toss you around like a washing machine. It can be even more dangerous just standing on the rocks. In the past, people have been standing on the rocks when a rogue wave hit suddenly and carried them out to sea.

So, here’s our warning if you decide to visit the Olivine pools: during the months of October to March - do not go swimming in the tidepools at all. It’s that simple. It’s not worth the risk. During the months of April to September, it’s much safer to swim in them - but you still have to be on your guard.

Now, if you just want to see the olivine pools but not swim in them, you can hike down and view them from the ledge above. To get there, you just follow the trail down from the parking lot. It’s about a ¼ mile hike, but the lava rocks are sharp - so sandals and flip-flops are no good. Wear tennis shoes or running shoes for safety - and for your feet.

One last note: the parking area has had a few smash-and-grab thieves. So be sure you take your valuables with you. If this all sounds like too much trouble for a few tidepools, Maui has a number of other tidepools, especially on the north shore, that are closer to sandy beaches and calm oceans you can swim in.

As you come up to olivine pools, keep your eyes peeled on the right side of the road for a huge boulder. when you see it, slow down…. why? Because the parking for the olivine pool is across the street from the boulder.

Now for some reason, this boulder has been named the bellstone rock - because supposedly it makes a noise like a bell when it is struck in just the right place. Now, in ancient Hawaii, there actually were such things as bellstone rocks, and they were used in large valleys to announce significant events to the villagers. But, as yet, no one has discovered the secret, because no matter how or where you hit this boulder, it only sounds like a deep thud. Why not try it for yourself?

Care to swim in the beautiful Olivine Pools?