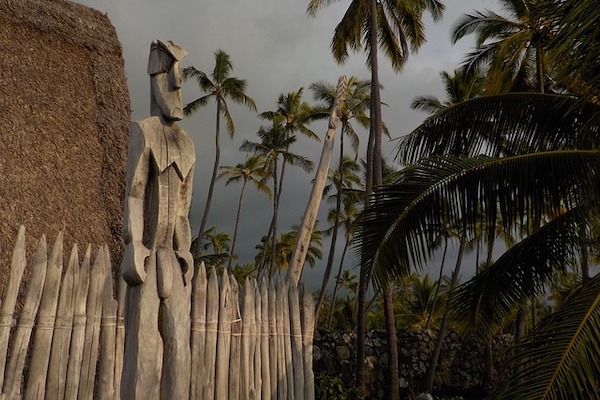 Every culture in the world has a way of recording history. Since the Hawaian language had no written form, history was passed down orally through songs, chants and dance. An important chant, called the Kumulipo, records Hawaiian’s view of the creation story. It starts with the creation of the universe and the human beings, and ends with the genealogy of royalty. It is very long, and takes over 3 hours to perform.

According to Kumulipo, in the beginning there was utter darkness inseparably connected to an invisible intelligence. This darkness is Papahānaumoku, the mother of Gods, the earth and the underworld. And then there was the creative light from Wakea or sky father. Together, Papahānaumoku and Wakea created a universe of opposites, light and darkness, land and sky, different yet equal to each other. They had a daughter, Hoʻohokukalani, which literally means the creator of the stars. Wakea had wondering eyes, and desired his daughter Ho’ohokukalani. Together, they gave birth to Kalo - who sadly was an unformed fetus born prematurely. They buried Kalo into the earth, and from this grew a Taro plant. Taro is a bulb-like root starch, similar to potatoes and yam.

This odd couple had another child, Haloa, who was healthy and strong. Haloa became the first man on the newly formed earth, and was the first Ali'i Nui - or high-ranking chief - and the ancestor to all Hawaiian people.

But what could men eat? As the story goes, the Taro plant that grew from his deceased brother became the main sustenance to feed the first man Haloa and the rest of the human race. Consequently, the Taro plant is highly respected in Hawaii, as a living symbol of the origins of humankind.