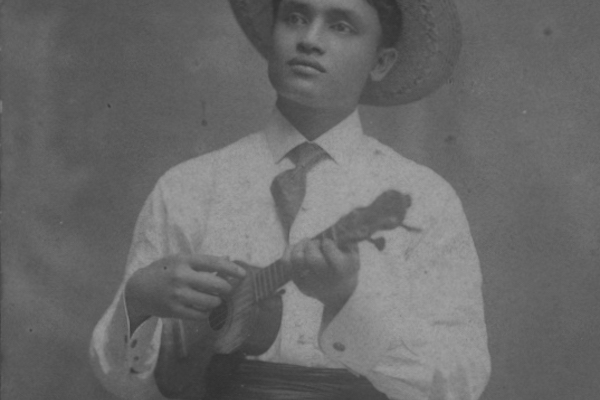 Well you’re not wrong, but it goes beyond that!

The origin of Hawiian music actually dates back to pre-contact times when ancient Hawaiians were creating meles, at the time meant “poetic language”, but it’s since evolved to mean song. Since ancient Hawaiians didn’t have a written language, these mele’s were how they preserved their history. Here’s an example of a mele oli, or a vocals only mele that’s unaccompanied by music. Mele hula, on the other hand, is a chant that’s accompanied by a hula dance or music, or a combination of both. Here’s an example.

As important as meles were to ancient Hawaiian culture, the sounds of Hawaiian music began changing when immigrants started coming to Hawaii in the late 1700’s.

For example, when the Spanish and Portugese came to the islands, they brought guitars with them, and Mexican Paniolos, or cowboys, helped teach the Hawaiians how to play the guitar. While Hawaiians used the teachings as a baseline to make music, they really adapted it into something all their own, by tuning their guitars in a unique way. We call this technique slack key. It sounds pretty cool!

You see, slack key was once considered “back porch music” by Hawaiians when it was first invented. They were very protective of their new style of music, and would only play it in more private settings such as at family gatherings in the backyard. But it didn’t take long for this unique music style to spread, and be enjoyed by all people.

Around the same time slack key guitar was being pioneered, Hawaiians were also adapting a small guitar brought over by the Portugese called the Cavaquinho, into what we know today as the Ukulele. Cool thing is, the Ukulele can also be played in the slack key style as well.