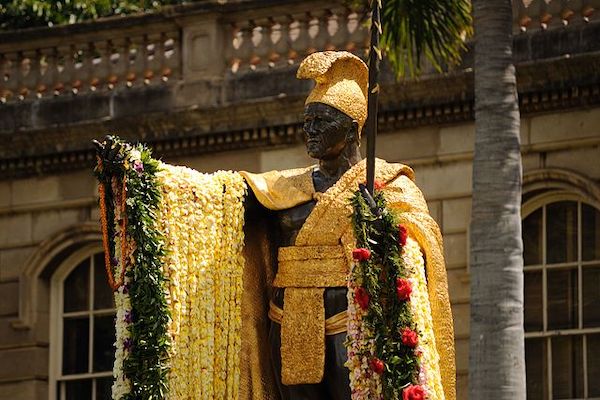 Daniel Ramirez from Honolulu, USA, CC BY 2.0, via Wikimedia Commons

Daniel Ramirez from Honolulu, USA, CC BY 2.0, via Wikimedia Commons

King Kamehameha the Great & His Conquest to Unite Hawaii

Now, there is one Hawaiian that you’ve got to know and hear more about. That is the name of the first King who united the islands of Hawaii. Kamehameha the Great is so great, that in fact a road in Oahu, the Kamehameha Highway, is named after him. You will surely be on that road if you’re doing the Shaka Guide Grand Circle Island Driving Tour!

Before Kamekameha the Great, each island was ruled by warring chiefs. It was prophesied by a renowned kāula, or prophet, that a great one would rise up to unite the islands. This prophecy, as we all learned and you will too, was eventually fulfilled in the life and legacy of Kamehameha the Great.

Born around 1758 on the Big Island, the night of Kamehameha’s birth was an auspicious night of great lights in the sky, likely caused by the passing of Halley’s Comet. Immediately after his birth, he was secretly hidden away and raised in the remote valley of Waipi’o, in order to stay away from the hostile chiefs who saw him as a threat to their power. In Big Island, there was a legendary stone that weighed over 3 tons called the Naha Stone. It was believed that the Naha Stone had a spiritual power, and that whoever could lift it would become the King. However, if unsuccessful, the person would be put to death. As a young man, with a lower rank by blood, Kamehameha was anxious to show his supremacy. Standing 7-ft tall and very strong, Kamehameha successfully lifted the stone and moved it several feet.

As the years passed, Kamehameha learned the art of warfare and rose to become a great warrior and political leader. However, many hurdles still stood in his way of uniting the islands.

During this time, Kamehameha was told by a prophet that if he would build a large war temple, or heiau, he would conquer all the islands.  Kamehameha set to work immediately, leading tens of thousands of men over a year to transport rocks, from some 20 miles away to construct the temple. It was back-breaking work.  When the temple was finally finished, Kamehameha invited his cousin, Chief Keoua, with whom he had warred for years, to the temple dedication ceremony. Keoua came willingly, likely accepting his own fate. No one knows exactly what took place, whether Kamehameha had planned it or not, but a scuffle took place leaving Keoua and all of his guards dead. Their bodies were carried to the War temple and offered as the first sacrifice to the War God Ku.

Finally, Kamehameha arrived at Oahu in a large fleet of war canoes. The Oahuan warriors fought ferociously, but were no match to Kamehameha, who forced the Oahuan warriors through the valleys to the steep cliffs of the Ko’olau Mountains.  The end of the battle was dramatic, as thousands of warriors, including women and children, were cornered against the cliffs and driven over the steep drop to their deaths on the jagged rocks, hundreds of feet below.

After so much bloodshed, the chief of Kaua’i made a peace agreement with Kamehameha, and thus in 1810, the Kingdom of Hawaii was established and united under one rule.