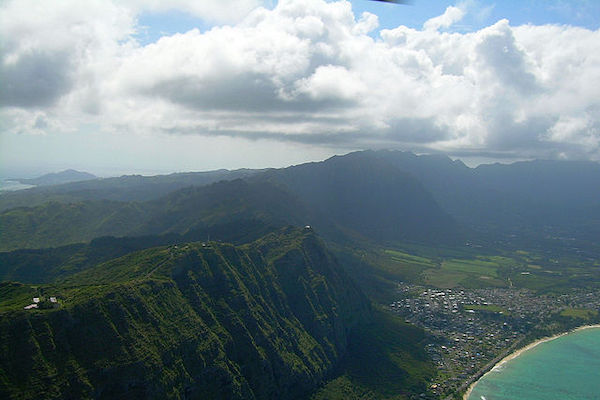 The 2.5 Million Year Old Volcano Left a Mountain Range in it's Wake

Ko’olau is one of the two mountain ranges that form the island of Oahu. It spans 34 miles, and the summits average about 2,500 feet. But don’t be fooled; this mountain range is anything but normal. It's noticeably sharp and jagged, and they have a sheer drop all the way to the valley floor. Let us tell you the story of how these mountains were created, and ultimately shaped into  what you what sits there today.

The Koolau Range, as you see it today, is all that remains of a massive volcano that began erupting on the ocean floor, around 2 and a half million years ago. When the volcano reached sea level, it continued to grow in a dome shape until it reached a maximum height of well over 10,000 feet. Soon after, the volcano seemingly went to sleep for another million years or so.

Suddenly, this volcano woke up one day, and started violently erupting lava. An awesome cataclysm - the pressure on the Ko’olau volcano grew, until it was so immense, that the entire eastern half of the island actually exploded, and slid down into the Pacific ocean! A catastrophic event that scientists call the “Nuuanu landslide” - raining down with debris that stretched over 100 miles on the ocean floor, the landslide generated a tsunami more than 3,000 feet high and devastated the entire Pacific region. After the landslide, Oahu broke into 3 places, and 5 smaller volcanoes appeared. You can visit these 5 volcanoes on our East Oahu Shoreline Driving Tour, which we highly recommend.

Although it hasn't erupted for tens of thousands of years, geologists say the Ko'olau volcano could possibly erupt again. Yep, you read that right... this volcano might erupt today! Well, the truth is you're more likely to be to be struck by lightning than you are to be harmed by a volcanic eruption on Oahu so no need to worry about it!