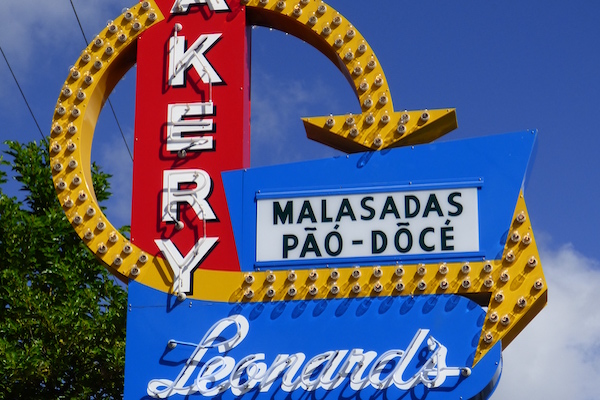 Donut without a hole? Leonard's Malasadas

No visit to Oahu is complete without a trip to Leonard's Bakery, a Honolulu mainstay and delicacy since 1952. Look out for the retro sign at several locations state-wide or just follow the savory-sweet smell right to Leonard's doorstep!

Leonard's is best known for its malasadas, which are portuguese-style donuts best eaten hot and fresh. We recommend at least one of the original sugar coated malasadas, but don’t be afraid to try local favorites, like guava, zesty li hing, or haupia coconut--they’re all so ono!

Nowadays, it’s hard to believe that some of Leonard's bakers thought malasadas would be “too ethnic” to succeed in Hawaii when they were first introduced shortly after the bakery’s grand opening.

In fact, it was Leonard's mother who first insisted the bakery honor the tradition of malasadas on Shrove Tuesday. As it turns out, the first malasadas were actually created with the intention of using up remaining household sugar in preparation for Lent.

And they were an instant success! Nowadays, malasadas are so ingrained into Hawaii that many locals call Fat Tuesday - you guessed it - Malasada Day! So, buy your mother a malasada today--and maybe probe for any great business ideas, while you’re at it...

We visit the bakery in our Legendary North Shore Loop Tour!