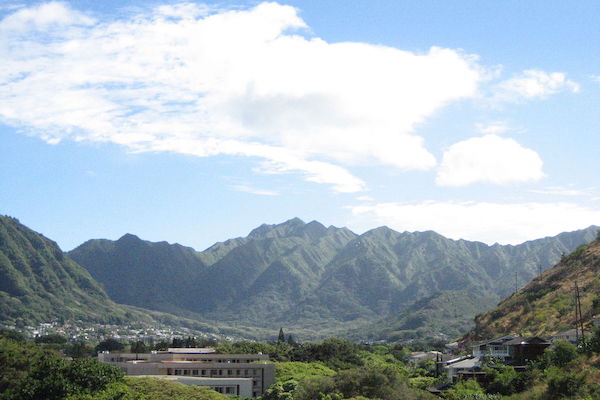 Manoa valley at the base of Ko'olau Range / Photo by Jeffmcneill - CC BY-SA 3.0 Manoa valley at the base of Ko'olau Range / Photo by Jeffmcneill - CC BY-SA 3.0

The Long History of Manoa Valley - From Farming to Luxury

The huge Manoa valley is packed with history, so let’s dig in! The name of the valley, Manoa, actually means “wide and vast.” It was formed as a part of a volcanic eruption. Over the years, the wind, rains, and rivers have  molded the area, creating a deep valley with towering faces and sawtooth ridges.

Now that the valley is all modernized, it’s tough to imagine Manoa valley as a vast farmland. But for centuries, that’s exactly what the land was used for.

You see, about 67,000 years ago, a volcanic eruption pushed lava through the valley, which rerouted the stream that now flows in it, and caused a build up of new soil on the valley floor. This new, fertile soil, combined with the cool weather and abundant rainfall of the valley, turned the valley into a naturally lush landscape - perfect for growing crops!

When people first began settling in the valley in the 1400’s, the primary crop grown was Taro, which made Poi, a staple of the Hawaiian diet. Over the next few hundred years, this land supported increasing amounts of Taro, as well as an increasing population. Eventually, in the early 1900s, Woolsey Poi factory opened, to more efficiently pound the Taro into Poi, which provided nutrition for the growing community. It operated for just 14 years, until a huge flood destroyed the factory and surrounding fields.

Around the same time the Taro patches were destroyed, Hawaii was going through a period of rapid transition. The native population had been decimated by foreign diseases introduced by immigrants; many these immigrants were being brought in to work on the sugarcane fields. In time, a tight knit group of about 90 Japanese farmers were established in the upper part of the valley. They grew mostly vegetables and flowers.

The Chinese also started to influence this community. Many had worked in the Poi factory, but after it shut down, they started planting rice. As the Chinese, Japanese, and other races joined the Hawaiians in this location, there were times of tension that spoiled island race relations. But eventually, Manoa - like the rest of Hawaii - became a peaceful melting pot of cultures and races that persists even to this day.

Fast forward to the modern day, and you’ll no longer see fields of Taro or Rice, but rather million-dollar mansions. Manoa is a highly desirable place to live, thanks to the cool weather and proximity to town. Even a run-down shack can easily sell for a million bucks!

The roads in Manoa valley sort of weave around and don’t seem to follow an organized grid pattern like most roads. Know why? Well, there’s an interesting reason for that.

Back in the old days, traveling in and out of Manoa valley wasn’t easy. Schools and jobs were all in town, but the valley roads were often muddy from all the rain. Students would walk for hours in all kinds of weather, back and forth, every day … that is, until around 1868, when an enterprising local started a mule-drawn carriage called an omnibus. Pretty smart, wasn’t it? For 23 cents a ride, you could travel in and out of the valley, without having to walk the whole way.

It seemed like a pretty good deal at the time. But in 1901, things got easier and less expensive, when the first electric trolley was established. For only only 5 cents a ride, you could ride the rails that zigzagged throughout the valley. Much better deal!

Of course, nowadays, the trolley system has been replaced by buses. But guess what? The roads in Manoa still follow the old trolley route, zig zagging around the valley!

Cool to think about, eh?

Finally, let’s talk about the Chinese cemetery, located in Manoa valley. It has an interesting story that helps paint the picture of Chinese influence in Manoa.

Back in 1852, a young Chinese immigrant named Lum Ching was searching far and wide for a site to appease the spirits. Using only a compass, along with a map of the earth and stars, Lum Ching landed on the very site of the cemetery.

You see, he believed it to be an extraordinary spot where the earth, stars and qi, or life force, are all in balance. He said, “it’s the pulse of the watchful dragon of the valley. people from all directions will come across the seas and gather here to pay homage… the Chinese people must buy this area and keep it as sacred ground.”

And that’s exactly what they did. They purchased the area that’s now the Chinese cemetery, and the rest is history. In fact, Lum Ching earned the title as the great ancestor, and, when he passed, he was buried there to rest peacefully in the sacred lands.

The Chinese name of the cemetery is "yi-cheng", which means "connection & righteousness.”

In fact, on the entrance sign to the cemetery, there’s Chinese text about ‘righteousness’ - it thanks the ancestors now, and more text that refers to ‘connection’, and says, “connecting our hearts to gather and commemorate those who have passed away”.

We visit on our Honolulu's Backyard Rainforest Tour!