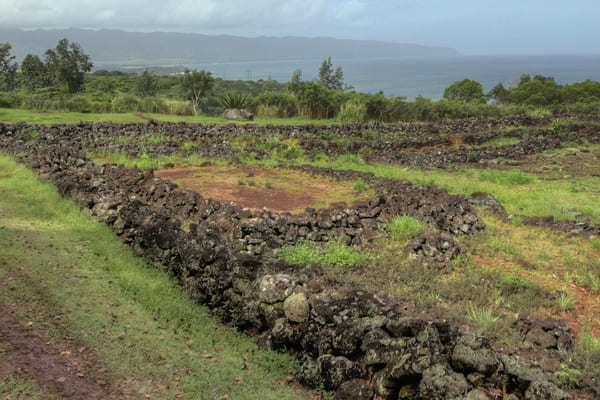 On the drive to Oahu’s north shore, you may notice the brown signs on the side of the road with an image of rock piles on them. These signs are there to point out the ancient villages that existed in each area of the island. The word for village in Hawaiian is called “Ahupua’a.”

Each Ahupua’a boundary extended from the mountain to the ocean, encompassing all the natural resources needed for the people in the community. For example, villagers from the coastal region would trade fish for taro with inland farmers, or wood with those who lived in the upslope area. In this way, each Ahupua’a was a self-sufficient unit through trade. You see, Hawaiians cherished their land and natural resources, and had an understanding that sustainability is a way of life.

Waimea, Oahu, was a fertile and flourishing Ahupua’a with an abundance of freshwater and seafood from the nearby bay. There’s also a lush forest with plentiful wood and wildlife. The heiau in the area was the religious focus of the Ahupua’a, where villagers would bring ho’okupu or offerings of banana, taro, pig and fish to honor their gods. Although this national historic landmark might look like nothing more than a series of rock walls now.

But did you know that over 250 years ago, it was a major temple in Oahu? The heiau is considered a Luakini heaiu, in which sacrificial ceremonies, even human sacrifice, were performed to help ensure success in wars. With a commanding view of the shoreline, this 400-year old temple was built with rocks hauled from the valley below.

In 1792, a British explorer named Captain Vancouver anchored his ship in the nearby Waimea bay, and sent a group of men to collect water. We don’t know the details, but somehow a disagreement broke out, and 3 of the crewmen were killed. Scholars have suggested that these men were likely sacrificed at this Heiau, to Ku, the god of war.

A few years later, after Kamehameha conquered Oahu, he took over this heiau. But in 1819 after Kamehameha’s death, his son Kamemahema II, abolished much of the traditional religious system and ordered the destruction of all heiaus in Hawaii including this one.

So if you do check it out, what you will see are the remains of the once great Pu'u o Mahuka Heiau.

Please note: there is no parking at the heiau. You must park down the road and it's about a twenty-minute walk to the heiau.

Interested in learning more about ancient Hawaii? Check out our Oahu tours!