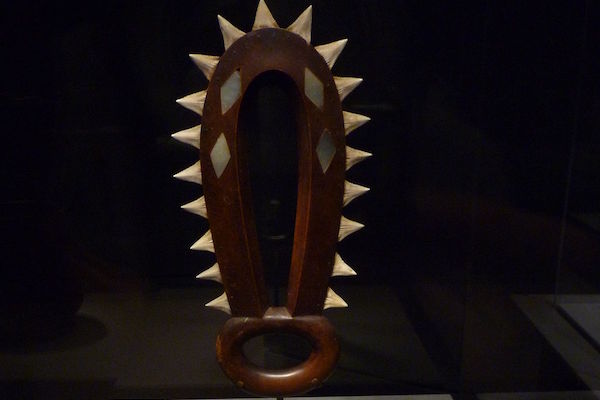 The Leiomano: The Ancient Hawaiians' Deadly Weapon of Choice

Oahu is a wonderful mix of old and new - at one point, you can be looking down on ultra-modern Waikiki from a hill formed by a volcano millions of years ago. This area has also been important to farmers for generations, from Mr. Van Tassel to the Hawaiians that grew sweet potatoes here. For the next while, we want to take you back to ancient Hawaii - before Kamehameha the Great united the islands. During that time, there was a lot of warfare between high chiefs who fought to gain more land and power.

Since Hawaiians were the most isolated people on earth for centuries, they developed many ingenious methods of farming and irrigation. They also created finely crafted art objects including beautiful capes made of the tiniest bird feathers for the royalty. With this same ingenuity they perfected the art of war and killing.

Before foreigners first arrived in 1778, the ancient Hawaiians had nothing made of metal. Their weapons were handmade from stone or wood and they fought in hand to hand combat. These warriors were athletes, the gladiators of ancient Hawaii. During the peaceful months of the Makahiki, when war was prohibited, warriors competed in physical contests such as rowing, running, boxing and wrestling. And their most dangerous weapon was the ‘lei o manō’, or the lei of shark’s teeth.

Resembling an elongated ping pong paddle, the lei o manō had a wooden handle; around the edges were carved grooves to hold the prized shark’s teeth. Usually, these were from Tiger sharks, which were hunted and killed by men set apart by their lineage. To bait the sharks in,  these elite fishermen bundled spoiled pork meat and sometimes even the body of a captured man. When the shark was caught and killed, the teeth were removed and then set and tied tightly into the perimeter of the wooden base, creating a club-like weapon with shark teeth sticking out the sides of the paddle. Not something you’d want to tangle with, right?

But this weapon, the lei o manō, was not used by every warrior. Only the ali’i or chiefs could use it. They were especially trained to make the rapid up and down slicing motion that could cut into the abdomen or major arteries of their enemy.

According to oral history, a small group of highly skilled warrior chiefs, known as the O‛ahu Eight, demonstrated the best of hand-to-hand combat, likely with weapons such as the lei o mano. Their battle with invading Maui forces is legendary. It happened soon after Captain Cook had been killed in Kona. In the spring of 1783, 600 Maui’s warriors sailed to Oahu in a surprise invasion. Their canoes landed on the beach below Diamond Head, and covered the sands of Waikiki.

Although Oahu’s army gathered quickly, they were no match for the well-organized Maui warriors. Eight of the most skilled O‛ahu warriors therefore quietly snuck away from the group and boldly charged into the middle of the Maui warriors to defend O‛ahu. The Maui warriors thought that they would easily and quickly kill these eight men, but to their surprise, the eight fought courageously side by side, defeating each wave of warriors, with bodies piling up around them.

Finally, when the eight had killed so many warriors, they leaped over the piles of bodies and escaped into the surrounding mountains. The stories of the Oahu Eight warriors’ courage went on be told and retold many times over the next two centuries.

But the victory of the Oahu warriors was short-lived. Eventually the Oahu king was captured and killed. His body was taken to the ancient temple at Waikiki and offered in sacrifice to the gods. The Chief of Maui, known as Kahekili, became the most powerful ali‛i in the islands, ruling over O‛ahu, Maui, Moloka‛i, and Lanai. Through the skill of hand to hand combat and traditional weaponry, he won many battles and increased his  power.

Just 7 years later, Kamehameha would go on to defeat Kahekili’s warriors in the famous Battle of Nu‛uanu. He gained the advantage by using rifles and a cannon received in trade from foreigners. These completely outranked hand to hand weapons like the lei o mano. Wars between island chiefs finally ended when Kamehameha united the Hawaiian Islands under a central government. With new technology, the combat skills with traditional weapons like the lei o mano were lost.