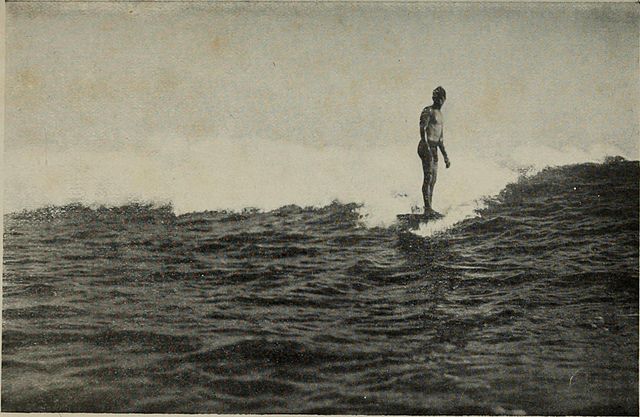 Surfing is called “He Nalu” in Hawaiian, and it literally means “to slide on waves”. Surfing originated in Polynesia, but was perfected in ancient Hawaii. The earliest account we have for surfing, is from the crew of Captain James Cook of England - known as the first westerner to explore Hawaii in 1779. The English sailors watched in awe, as Hawaiians - both men and women - surfed the waves on solid wood planks with great skill, and looked right at home. By this time, Hawaiians had enjoyed surfing for more than a thousand years, and it was a sport not just for the ali’i, or chiefs, but commoners as well.

After the arrivals of Westerners in Hawaii, traditions of surfing came under attack - it was seen as a sign of laziness and immodesty. Because back in those days, even women surfed topless…naked! You can imagine how that must have shocked the missionaries! Surfing took another blow, when diseases, such as measles and smallpox, wiped out 90% of the native population. As a result, over the years, fewer and fewer were seen in the ocean surfing.

It wasn’t until the early 20th century, when Hawaii slowly emerged as a popular tourist destination, that surfing came back to its own. Many famous Hawaiian surfers demonstrated surfing at the shorebreaks in California - and eventually introduced the sport all over the world.

One thing you should know, is that the surfing season is between November and February - when waves change from the calm summer ocean into monstrous winter waves, sometimes reaching more then 30 feet high! That's about the same height as a 2-story house! If you happened to be out when the surf is up, it is very exhilarating to watch!

Waves usually get pretty flat during other times of the year. So don’t be surprised if no surfers are in sight during your visit. Take advantage of the calm ocean and enjoy sunbathing and swimming. So get your beach gear ready and sunscreen rubbed on, and head on to the beach and see the surfers and epic waves.

Check our our Grand Circle Island Tour for more!