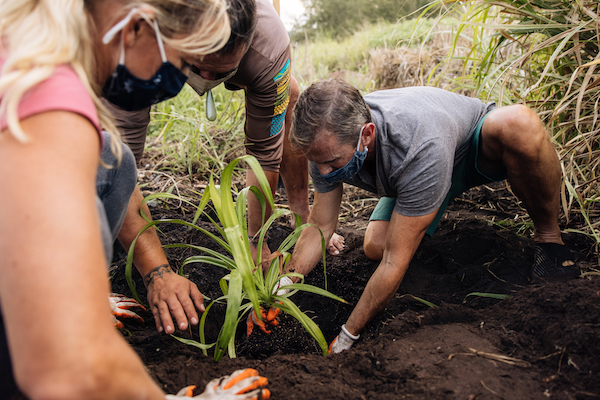 Round Top is actually a cinder cone, although not shaped like a Punchbowl like the famous Punchbowl Crater. It looks more like a rounded hill top. That’s where it got its name! But between us, we like it’s original name better... “hill of the rolling sweet potato,” or pu’u ‘ualaka’a in Hawaiian.

Bet you’re wondering what the story behind rolling sweet potatoes is, aren’t you?

Well, it goes like this... back in early Hawaii, king Kamehameha had his people growing sweet potato on that very hill. One day, while they were harvesting the sweet potatoes, one got away and rolled down the hill, all the way to Manoa valley! Some say that the rolling sweet potato was massive! Now that must’ve been a sight to see!

Actually, while we’re on the subject of sweet potatoes, they used to be grown on the mountain! In fact, just 100 years or so ago, the entire Tantalus mountain region was completely bare of any and all trees! In those days, nothing but grass and sweet potato grew here. So, what happened?

Well, let’s start at the beginning. In ancient times, this area used to be a beautiful native forest of indigenous trees such as Koa, Ohia, and Sandalwood. But as merchants started coming to Hawaii, the native Sandalwood trees were suddenly in high demand by the Chinese who wanted the wood for its fragrant scent. Seeing an opportunity, the Hawaiian monarchy traded Sandalwood for things like weapons and metal. It didn’t take long for this natural resource to be exhausted.

Soon after the Sandalwood trees were all gone, the whaling ships came to Hawaii. They needed a fuel source to process whale blubber into whale oil. So again, the Hawaiians went into these forests to cut down any and every tree they could find to trade. In just a few decades, this native forest was completely destroyed.

Luckily, in 1904, the Makiki Forest Reserve was established - and slowly but surely, a reforestation effort took place, resulting in the beautiful canopy there today.

Fun fact: at the top of the mountain, is the same location Elvis took his girlfriend for a picnic in the movie Blue Hawaii. The Honolulu skyline may have evolved a bit since the movie was filmed, the view today is just as breathtaking.

You can see Diamond Head, Downtown Honolulu, and Pearl Harbor laid out before you. You can spot some of Oahu’s landmarks from up there - it’s one of the best views in town, hands down.

Want to experience the view?