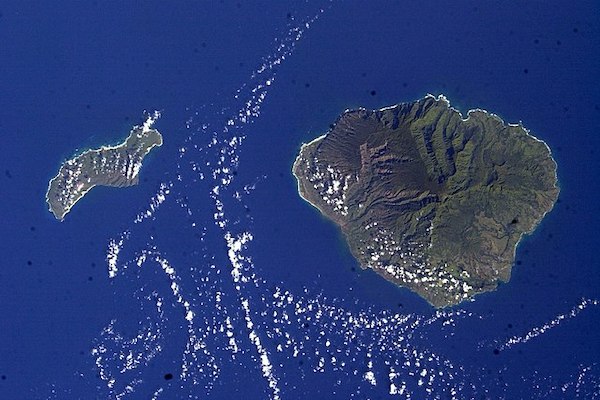 The island of Kauai on the right / The original uploader was Ulfl at German Wikipedia., Public domain, via Wikimedia Commons

The island of Kauai on the right / The original uploader was Ulfl at German Wikipedia., Public domain, via Wikimedia Commons

So, as more and more merchant ships began stopping in Hawaii, the Hawaiian chiefs started to trade for western weapons such as cannons and guns. Kamehameha was an early adopter to this western technology, and with these powerful weapons, he set out from his home in the Big Island to conquer Maui. Maui’s warriors fought with their might, but was no match for the formidable Kamehameha. After Killing tens of thousands of Mauian  warriors and chiefs, Kamehameha went on to Oahu. There, in like manner, Kamehameha brutally killed anything and anyone that stood in his way.

Now Kamehameha was king over all the Hawaiians Islands - except for one. Yep, you guessed it, our little island of Kauai. But Kamehameha, with so much momentum from his victories, was not gonna let Kauai remain independent like it had been for 500 years. Oh no. Now more than any other time, Kauai was there within his grasp. So, as a determined conqueror, Kamehameha immediately set to work ordering his foreign carpenters to build a massive fleet of western ships. Some of his close advisors warned against it, but nothing could dissuade Kamehameha from attacking Kauai.

News of Kamehameha’s trail of blood and death left behind on every island finally reached Kauai. Can you imagine what must have been going on in the minds of the Kauai people? They were the last island standing, and firmly in the sights of Kamehameha. Of course, the king of Kauai and the people tried to make as many preparations as possible, but everyone knew that they were outmatched and outgunned. All they could do is stay ready and wait for the attack!

Want to hear the rest of the story?