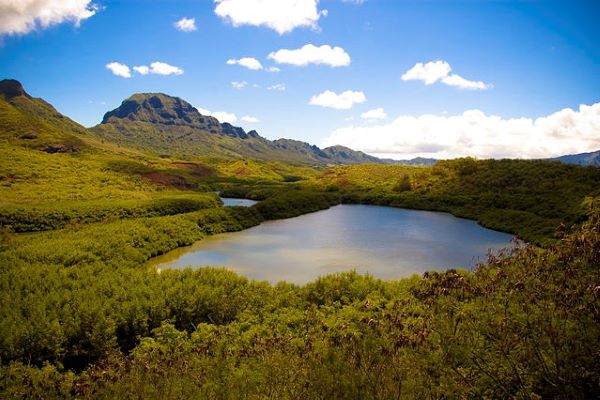 A Race of Dwarf Hawaiians Older Than the Ancient Polynesian Settlers?

In Lihue, you get beautiful sweeping views of the pasture land, surrounded by mountains. If the weather is good, I highly recommend  you roll down your windows and smell the fresh air!

So, what’s the big deal about a trip to Lihue you might ask? Well,at the end of this road, there is something of significant  value to Kauai's history that I want  to show you. It’s called the Menehune Fish Pond.

If you’ve taken our other Shaka Guide Kauai Driving Tours,  you will notice that each has a story about these ancient inhabitants of Kauai called the Menehunes .

No one really knows who the  menehune were and where they came from. But this much we do know. According to Hawaiian legends, the menehune were a race of small people that stood only about 3 feet tall. They were mysterious and lived deep in the forest. Because they were shy and didn’t like to be seen by people, the menehune usually only came out at night. But despite their small size, the  menehune were said to be very strong, and were ingenious craftsmen.

A story was told about a local Kauai youth named Laka . Laka’s father had gone away one day to visit a neighboring island… but  for some reason, he never came back. Laka was teased growing up because of this.

As he grew into a man, Laka developed a strong desire to go and search for  his father.  Laka’s mother told him to go up into the mountains to find a koa tree, tall and straight, suitable for a canoe. Laka did just as he was told.

After much searching in the  mountains, he finally found just the right tree. After cutting it down, laka went home, planning to retrieve the fallen tree the next day. However, when he returned the next morning, the tree was back in its place as if it had never been cut down. Confused and amazed he cut it down again, only to find the tree, once again  restored to its stump the next day.

“Wow, what kind of magical tree is this?” Laka thought to himself. Laka again chopped the tree down. But this time, he also dug a hole next to the stump. Laka then hid himself in the hole to see what would happen to the tree.

Time slowly went by, as Laka sat in the hole hiding, he slowly drifted off to sleep. In the dead of night, Laka was awakened  by a humming noise that echoed throughout the forest. As the noise grew louder and louder, Laka saw them - a band of menehune men led by a chief!

Although very surprised, Laka was able to  come to his senses,  and he came up with a plan. When the menehune got closer, Laka stretched his arm and quickly grabbed the chief by the beard. Holding the chief as a hostage, Laka threatened the menehunes to carve him a canoe or he would kill the chief. Reluctantly, the menehune agreed. But  only under a few conditions.

“Deal!” Said Laka to the chief. The next day, Laka did just what he was asked by the menehune. First he built a large hut for the canoe, then he prepared a large amount of food. As the night came, Laka lay awake waiting. Soon, he heard the humming noise emerging from the  forest. The menehunes first feasted on the food, then off they went, to begin their work. They hummed all through the night. Although very tempted, Laka kept his word and didn’t even peek once.

At dawn the next day, the humming disappeared. When Laka opened his eyes, the menehune were gone. . .  And in the hut, lay a beautifully crafted canoe of the finest workmanship.

Before you dismiss the story as a fairytale. Let me tell you, there has been evidence showing that a race of people called the menehune actually did live here  on kauai.

In fact, there exists an ancient fish pond that was thought to be created by the menehune themselves.  Called “the menehune fishpond,” go figure.

But what is a fishpond you might ask? Well, a fishpond is a masterpiece of engineering invented by the ancient Hawaiians. Baby fish would come in from the river through a narrow gate to graze on the algae in the pond. But eventually, they would grow too large to swim out. The fishpond is ingenious and a much better way to preserve fish than a refrigerator because it ensures  a  ready supply of fresh fish, all year round.

Now most fishponds are located next to the ocean. But this fishpond is unique in that  it is  inland, and next to a river.  It has a wall that’s 900 feet long, and 5 feet tall. Each rock was meticulously stacked, creating a barrier separating the pond from the river. Another interesting thing about it is that the fishpond is really old. It’s so old that it pre-dates the arrival of the first Hawaiian settlers to Hawaii, . So, we know for sure, it’s not the ancient Hawaiians who built it.  Then who did..... If not the menehunes?

Hear more about them on our Poipu and Koloa Tour!