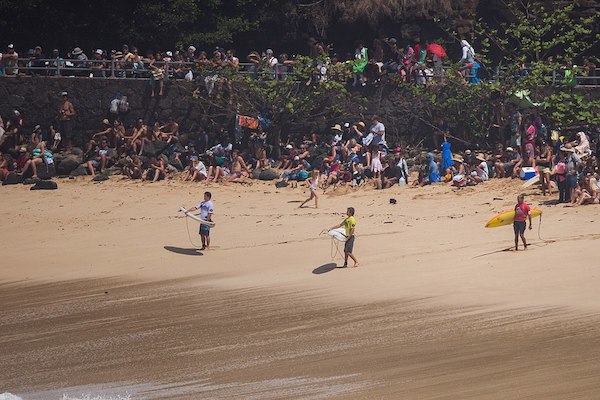 Eddie Would Go: The Story of the Eddie Aikau Big Wave Invitational

Have you heard of the phrase “Eddie would go”? Well, if you are in Waimea or on the island of Oahu, let me tell you about the local hero that everyone knows about. His name is Eddie Aikau. He was one of the most iconic figures on the north shore. Eddie was a modern-day hero, champion surfer, and excellent swimmer. He was the first lifeguard hired by the city and county of Honolulu, covering the area of Sunset Beach all the way to Haleiwa. Not one life was lost during the years when Eddie was the lifeguard, with more than 500 lives saved by him alone.

In 1978, the Polynesian Voyaging Society was seeking volunteers for the 2,500-mile journey on a traditional sailing canoe, following the ancient sea route between Hawaii and Tahiti. At age 31, Eddie joined the voyage. The canoe left Hawaii but soon capsized miles off shore. In an attempt to get help, Eddie paddled toward the nearest island on his surfboard.  Although the rest of the crew was later rescued, Eddie was never seen again.

To Honor Eddie, there is an Eddie Aikau Big Wave Invitational Surfing Competition held at Waimea Bay. Only the best surfers get invited to compete, and waves must reach a minimum of 30 feet in order to meet the condition. It was said that during the first year’s competition, the waves were enormous and extremely dangerous. While the event organizers discussed possible cancellation, someone said "Eddie Would Go". Yes Eddie would go, because he dared to do what no one else would. The phrase "Eddie Would Go" stuck, and started appearing in t-shirts and bumper stickers.