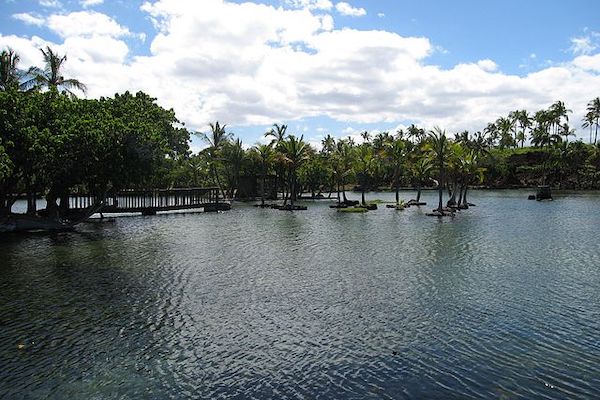 In a lesser known part of Hilo, with beautiful beach access, you can find a Hawaiian fishpond that is still being used today!

Now, you might be wondering, what exactly is a fishpond?

A fishpond is a masterpiece of engineering invented by the ancient Hawaiians. The caretakers would build a grated gate with an opening to the sea. Baby fish would come in from the ocean through the narrow bars to graze on the algae in the pond. But eventually, they would grow too large to swim out.

The fishpond is an ingenious way to have a constant supply of fresh fish, all year round. Hawaiians were experts at oceanic aquaculture, and hundreds of fish ponds have been found around the islands. Even after hundreds of years, the Hilo fishpond is still lovingly maintained by the Seaside Restaurant family.

The family-owned restaurant was opened back in the 1920's, and their fish is sourced right from the fishpond that they manage. Their specialties are the famous Mullet and Aholehole - people come from near and far to try it. It's a perfect place for fresh local grinds, and a good spot to watch the diverse and colorful birds flying around the water!

The fishpond is named Loko-Waka. Loko is the Hawaiian word for pond…. and the Waka part has a whole story of its own.

Madam Pele, goddess of fire, is known for being a jealous lover. When a lizard-lady-sea monster named Waka, was found to be romancing one of Pele's darlings, she got mad and a battle ensued. According to legend, this war happened at the park the pond sits in today! Waka, frightened for her life, dove into the Loko, or pond, and ever since... she has been known as Loko-Waka, the guardian of the fishpond.

Want to see an ancient fishpond in person?